‘It is a truth universally acknowledged that a single man in possession of a good fortune must be in want of a wife.’

One of the few opening sentences of a novel that many people can quote off the top of their heads. It sets the tone for a magisterial work of fiction which includes some of the most delightful and well-imagined characters in literature as well as a subliminal discussion on people, especially women, as property.

We’ll be getting an assessment of the book, now two centuries old, from journalist Nóirín Hegarty, academic Sophia Hillan and historian Turtle Bunbury, about the society portrayed in the book, the life of Austen herself, as well as her associations with Ireland. Nóirín was recently reminded on Twitter to go and re-read the book, Turtle has an interesting insight into the life of one of Austen’s few known inamorata, Irishman Thomas Lefroy, and Sophie Hillan is the author of May, Lou & Cass: Jane Austen’s nieces in Ireland. 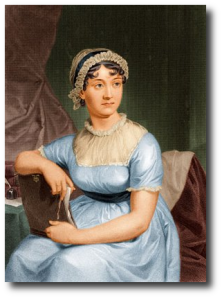 Jane Austen – her life and works

The Jane Austen society of the United Kingdom

If, in 1797,  the London publisher Cadell had bothered to read a novel by a young author named Jane Austen you might be sitting in the Gate Theatre tonight preparing to enjoy an adaptation of that great late 18th century novel First Impressions. Instead, Mr.Cadell or one of his overworked employees, anticipating the man who would pass on the Beatles a couple of centuries later, returned the young lady’s novel unopened and, as a result, we are about to enjoy an adaptation of one of the great early 19th century novels Pride and Prejudice. Academic Austenophiles suggest that Mr. Cadell did us all a favour and that only extensive reworking of First Impressions gave us the Mozartian masterpiece that is Pride and Prejudice.

Austen herself wasn’t so sure though. In, what  admittedly may be a tongue-in-cheek observation, she wrote to her sister that ‘The work is rather too light, and bright, and sparkling; it wants shade; it wants to be stretched out here and there with a long chapter of sense, if it could be had …‘ Aside altogether from being bewildered by a writer who considers the terms ‘light’, ‘bright’ and ‘sparkling’ to be in any way pejorative, it has to be said that any such interference with her masterwork would have been the worst kind of Austentation.

There are those who insist that, after the success of Sense and Sensibility in 1811, the author rushed too quickly into print again with an  imperfect follow-up in Pride and Prejudice (1813). Personally I would have my second call on their second and we would sort this thing out in the fashion of the period, with pistols at ten paces on Wimbledon Common at dawn. If they feared for their reputation I’d be happy to repair to Boulougne.

Had Austen let Pride and Prejudice cook for a little longer (and remember it had been simmering on the hob since 1796) we might well have been acknowledging some more universal truths, but we must always remember the axiom about not letting the truth get in the way of a good story. Because, to paraphrase a certain Scandinavian brewer,  ‘English literature doesn’t do perfect novels, but if it did it would probably be Pride and Prejudice’. Had she continued to tinker she might have ended up with an early Mansfield Park. Her 1814 publication is an admirable work  which explores the rapid urbanisation of the England in which she lived, and the last ditch stand of country values against those of the city, but it has at its heart two of the most priggish, sanctimonious and tedious central characters in all of Austeniana, in Fanny Price and Edmund Bertram.  By neglecting to add the ‘shade’ to which she referred in her letter, to Pride and Prejudice, she gave us the immortal gift of the Bennets (with all their myriad imperfections), the clerical error Mr. Collins (for whom the word ‘fatuous’ could have been invented) and the brooding Roy Keane-like figure of Fitzwilliam Darcy (it is useful occasionally to restore his first name to him lest he end up like Colin Dexter’s Morse – a mere detective without Endeavour).

In Pride and Prejudice what we get is a joyous baring of claws by a sympathetic but sardonic observer of the cloistered, repressive, suffocating and patriarchal society of industrialising England.  D.W. Harding attracted much attention by coining the phrase ‘Regulated hatred’ to describe Austen’s satirical gifts. It is a wonderful description, but not of Jane Austen. Jonathan Swift was prone to both regulated and unregulated hatred in his writing.  Austen is altogether less angry than the Dean, but equally incisive in the manner in which she pillories her society. At the basis of the entire novel is the silent ‘P’ in Pride and Prejudice – ‘property’. The action consists of a series of negotiations in which everything is carefully weighed  (as befits Napoleon’s ‘nation of shopkeepers’) and has a value attached.  Swift might have trained his ‘savage indignation’ on the process but Austen seems to shrug her shoulders. If anyone thinks that love triumphs over utilitarianism at the end of Pride and Prejudice  perhaps they have not factored in the weight which attaches to physical beauty and personal charisma  (Darcy/Elizabeth) in the negotiations and Elizabeth’s reaction on seeing Darcy’s estate for the first time (‘to be mistress of Pemberley might be something’). True, there is romance at the heart of Pride and Prejudice, (Bingley/Jane) all other things being equal! Austen holds a mirror up to her society not a stiletto to its throat.

It appears that Austen may have reserved far more of the wickedness of her satire for her personal letters than her fiction. Perhaps more of Harding’s ‘regulated hatred’ was poured into her private correspondence with trusted intimates. Certainly the letters which survive have an earthiness which has surprised many Austen scholars. Sadly her correspondence  was carefully vetted, post mortem, by her aptly named killjoy sister Cassandra – what  a shame some 19th century Clytemnestra didn’t despatch censorious Cassie before she got amongst her sibling’s letters and culled the really interesting stuff!

When the Gate Theatre first presented Pride and Prejudice in Alan Stanford’s wonderful production we had not yet been seduced by the famous BBC adaptation which spawned  a whole generation of Junior Cert students who would insist in exams that Mr.Darcy, in order to impress Elizabeth Bennett,  had dived into the lake fronting his impressive ancestral pile in Derbyshire. Now that Colin Firth and Jennifer Ehle occupy that tiny corner of our frontal lobes which produce instantaneous  images of Darcy and Elizabeth Bennet, I salute the Gate’s bravery in trying to recapture and subdivide our imaginations with shadows of their own.