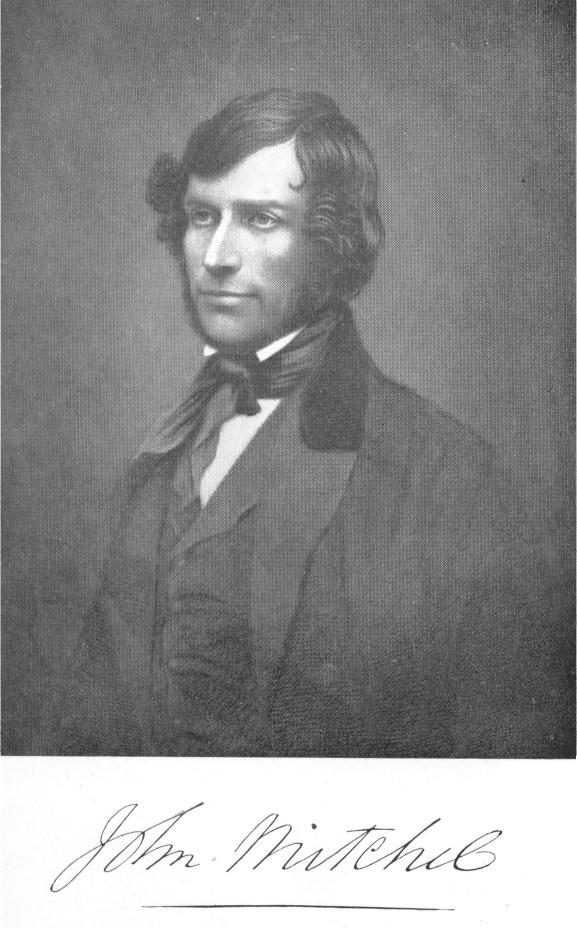 He was one of the great propagandists of his day, although the causes he espoused often placed him on the wrong side of the angels. He was loved and loathed in equal measure. He was one of the few Irishmen to have incurred the wrath of the British government and of the Federal administration of the USA.

John Mitchel was born near Dungiven in Derry in the year of the Battle of Waterloo, 1815. He probably would have been on Napoleon’s side if only because the opposing Army was largely British. Son of a Presbyterian clergyman Mitchel created his own pulpit in a series of journalistic enterprises in Dublin, Tennessee, Virginia and New York.

Mostly raised in Newry in Co. Down Mitchel’s first political association was with the Young Ireland movement of the 1840s and the famous Nation newspaper, founded by Charles Gavan Duffy, Thomas Davis and John Blake Dillon in 1842. But long before the abortive Young Ireland rebellion of 1848 Mitchel had moved on, finding the editorial policies of the Nation rather too bland for his tastes. He founded his own rival nationalist weekly newspaper the United Irishman which, in its inaugural edition, claimed that ‘the world was weary of Old Ireland and also of Young Ireland’ thus attacking both Daniel O’Connell and his younger antagonists with the same broadsword. Mitchel aimed to be an equal opportunities offender and succeeded admirably.

The United Irishman however, was not responsible for the destruction of many trees as it was closed down by the British authorities after a mere sixteen issues. Mitchel was later tried before an elegantly and efficiently packed jury, found guilty of treason-felony, and deported to Tasmania, then known as Van Diemen’s Land. The result was one of the greatest works of Irish political history, The Jail Journal, in which Mitchel wrote about his own experience of deportation and advocated a far more militaristic approach to Ireland’s ‘English problem’ than would have been popular heretofore.

He followed this up, in 1861, with a white hot diatribe The Last Conquest of Ireland (Perhaps) in which he accused the British government of operating genocidal policies in its Irish colony during the Great Famine. The latter work was written in the safety of the USA, as his escape from Tasmania had been engineered in 1853.

So far so good, at least if you are an Irish nationalist, especially one of more militant stripe. But it is from here on in that Mitchell’s career becomes problematic. Settling in New York he established the radical newspaper, The Citizen. He used this publication as a platform for continued attacks on British policy in Ireland but also employed its columns for flood-blooded assaults on advocates for the end of slavery. An abolitionist he was not.

When the American Civil War began he moved lock, stock and barrel to the South, settling first in Knoxville, Tennessee where he published the Southern Citizen. In its pages he attacked the Union, once describing Abraham Lincoln as ‘an ignoramus and a boor’. He also had a go at Irish-American political and military leaders, like his erstwhile Young Ireland ally Thomas Francis Meagher, who fought on the Union side. He compared the South to Ireland and suggested that black slaves experienced better economic and social conditions than Irish tenant farmers. He didn’t reserve all his vitriol for attacking the North either. Confederate President Jefferson Davis was a frequent target, Davis was far too much of an old softy for Mitchell. One of the ironies in all of this was that his advocacy of the Confederacy put him on the same side in the conflict as the British government, which was officially neutral, but for the South.

After the war, however, Mitchel shared the fate of Jefferson Davis, spending a short time in jail for his anti-Union spleen. His imprisonment would have given him plenty of time to reflect on the deaths in the war of two of his sons. A third lost an arm. The latter years of his life were spent in the service of the Fenian movement for whom he worked in Paris, and in standing successfully, albeit in absentia, for election in Tipperary in 1875. His success at the polls was nullified by the authorities on the grounds that he was a convicted felon. In those days you could commit all the felonies you liked AFTER you were elected but not before. Mitchel died suddenly in 1875 at the age of 59. His grandson, John Purroy Mitchel, later became Mayor of New York.

John Mitchel published his political manifesto, in the shape of the first issue of the United Irishman newspaper, one hundred and sixty-eight years ago, on this day.