Talking about the Aryan race was actively discouraged until recently. Then we discovered the so-called ‘alt.right’. It could become unpopular all over again if the ideas of Ignatius Donnelly are correct. His theory was that Aryans were from the lost island of Atlantis, and that their red-haired blue eyed descendants were Irish. So, eat shamrock Breitbart.com!

Ignatius Loyola Donnelly was born to an Irish father, and Irish-American mother, in Philadelphia in 1831. He became a lawyer in his twenties, but devoted most of his life to politic,s and to what would today be described as ‘pseudo-science’ but which, in the nineteenth century, had a significant constituency.

Donnelly was something of a utopian socialist. In the 1850s he co-founded a commune in Minnesota which went spectacularly bust after one of the cyclical financial downturns of nineteenth century America. This was the ‘panic of 1857’ – son of the ‘panic of 1837’ and father of the ‘panic of 1873’.  You could almost set your alarm clock by them.

After that Donnelly, who had acquired something of a reputation for financial impropriety, entered politics, the last refuge of the scoundrel. He was a Congressman for the Minnesota Second District from 1863-69, an advocate of female suffrage, and a radical champion of freed slaves. So, not that much of a scoundrel after all. We’ll come back to the politics later.

But he was also celebrated, in the late nineteenth century for his writing, especially his explorations of the legend of the lost city of Atlantis in his book Atlantis: the antediluvian world. He had an intense Platonic relationship with his subject, as in, he took as gospel everything the Greek philosopher Plato had written about the place. Atlantis wasn’t a fable to Donnelly or Plato, it was real.  It was where man first rose from barbarism to civilisation. It was destroyed by a natural disaster that gave rise to the biblical stories of the Flood. There’s a lot more besides. It’s all very ‘New Agey’, and led to Donnelly being dubbed by some ‘The Prince of Cranks’. In a subsequent work he speculated that the cataclysmic event that had destroyed Atlantis had been caused by a meteor strike. While his work may have been wacky and alternative it sold very well.

Donnelly also had a bee in his bonnet about William Shakespeare. He was one of many who tried to debunk the notion that the plays ascribed to Shakespeare, had actually been written by the humble thespian from Stratford upon Avon. His theory was that they were actually the work of Francis Bacon, the seventeenth century English philosopher. He theorised that Bacon had inserted a code in the works of Shakespeare, which only clever people like Ignatius Donnelly were capable of deciphering. The ‘Bacon as Shakespeare’ theory had a lot of enthusiastic adherents at the time.  It still does today.

In 1891 Donnelly wrote a dystopian science fiction novel which predicted the invention of radio, TV, the internet and poison gas. Caesar’s Column is set in 1988, in an America ruled by a ruthless financial oligarchy. So, well off the mark there! The book is about an insurrection against capitalism.

Politically, Donnelly moved leftwards as he got older, from the anti-slavery Republican party of the Civil War, to the People’s Party of the 1890s. The latter was a coalition of mid-western agricultural and labour interests which sought an eight-hour working day, the abandonment of the gold standard, and the reining-in of the massively wealthy and predatory railway interests. Donnelly was responsible for much of the formulation of the political platform of this short-lived ‘third’ party.

In 1900, a few months before his death, he was nominated as the Vice Presidential candidate for the People’s Party in that year’s general election.

Ignatius Loyola Donnelly, who, despite being called after the founder of the Jesuit Order renounced his Irish Catholicism early in his life, was born one hundred and eighty six years ago, on this day. 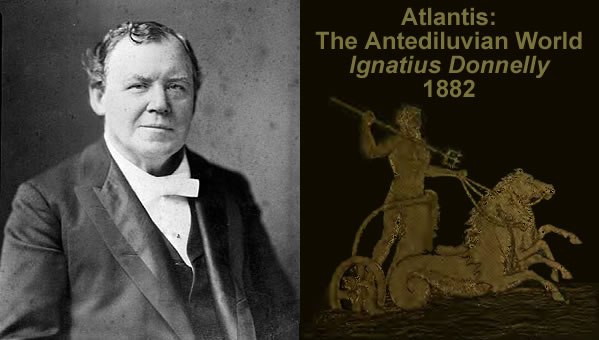