The Green and the Gray: the Irish in the Confederate States of America 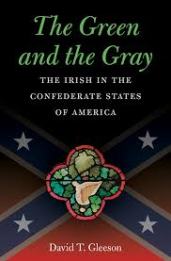 It’s the song most associated with the brief existence of the Confederate States of America. Dixie tells the unlikely tale of a freed slave pining for the South (‘I wish I was in the land of cotton/Old times they are not forgotten’). Although a particular favourite of Abraham Lincoln it became the unofficial anthem of the Southern insurgency. It was, however, written by an Irish-American northerner, the composer and ‘blackface’ troupe leader Daniel Emmett, as the closing song of a minstrel show run by the New York Irish O’Neill brothers. As a faux Irish contribution to that traumatic conflict, known south of the Mason-Dixon line as ‘The War between the States’, it has little place in David T.Gleeson’s admirable survey of the Irish contribution to Confederate war effort. There are more than enough vrai Irish Confederates to populate this splendid and absorbing narrative.

Given the lowly status of Irish diaspora history in this country Gleeson’s volume is a welcome addition to a paltry Irish-originated corpus of literature on the topic. This scanty oeuvre has recently been augmented and enhanced by Damien Shiels in his The Irish in the American Civil War (and on http://irishamericancivilwar.com), Ian Kenneally in sections of his Courage and Conflict: Forgotten Stories of the Irish at War and webmasters like Robbie Doyle in www.myleskeogh.org.

Gleeson goes well beyond the merely anecdotal in conveying a sense of what it was to be an Irish immigrant in the southern states that formed the Confederacy between 1861-65. With the 150th anniversaries of all the major set-piece confrontations of the US Civil War being currently marked in an American half-decade of commemoration, this is a timely and superior addition by an Irish scholar to a field normally the preserve of Americans, as the extensive bibliography illustrates.

Gleeson peels back layers of received wisdom and reveals the complexities as well as the banalities of the Irish experience of the American South. He points out, for example, that some Irish immigrants actually settled in southern cities like Charleston and Savannah in order to escape the nativist Know Nothing bigotry of the rapidly expanding northern conurbations. In the 1840s for example, a freshman Congressman from Mississippi felt compelled to speak out forcefully against nativist attempts to curtail the naturalization of Irish immigrants as American citizens. His name was Jefferson Davis and he went on to assume the Presidency of the Confederacy in 1861.

But Gleeson also acknowledges an ambiguity on the part of many Irish in the South to the ‘peculiar institution’ of slavery. While some, like the Roman Catholic Bishop of Charleston, Patrick Lynch, acquired slaves and others, like John Mitchel, approved of the practice, still more, like Jack McGuigan of Vicksburg, aided the escape of slaves at great cost to themselves. Ten years hard labour in the case of McGuigan.

Some of the southern Irish rationalised the practice of slavery on the dubious basis that slaves were better treated than the Irish peasant or agricultural labourer. In the rubric of the truly ’Confederate’ Irish the crusading ‘Yankee’ morphed into the despised ‘British abolitionist’ and offered further justification for the keeping of human beings as slaves.

John Mitchel had brought with him to the USA notions of Irish exceptionalism characteristic of the Nation newspaper and the Young Ireland movement of the 1840s. The Lord Haw Haw of the Confederacy, through his journalistic work on the Richmond Enquirer, adapted his ideas on race to encompass the validation of slavery. He managed to conclude, in the process, that the South was actually more ‘Celtic’ than the North (although 95% of Irish emigrants settled north of the Mason-Dixon line). Mitchel wrote in 1858 that ‘the South is Ireland’ – by which he meant a beleaguered, agrarian community oppressed by a larger and more powerful industrial neighbour

Gleeson records the departure from New Ross, Co.Wexford in the 1850s of one Patrick Murphy. Murphy moved to Natchez and purchased slaves. The Wexfordman left behind an impressive archive in which he recorded that he was prone to whipping any of his charges who ‘deserved punishment’.  It is chastening stuff for Irish readers who might well prefer to remember his namesake Bridget Murphy. She abandoned Wexford in 1849 in favour of Massachusetts. There she met – or was re-united with – another native of her home county, Patrick Kennedy. In 1963 their great-grandson, John Fitzgerald Kennedy, set about tackling the abiding legacy of slavery with civil rights legislation he never managed to bring to fruition before his assassination.

It appears that the employment of Irish nationalist sloganeering, by recruiters like General Thomas Francis Meagher, was not just a Union phenomenon. Conveniently ignoring the tacit Confederate alliance with Britain, Charleston slave dealer Thomas Ryan deployed some emotive rheortic to recruit Irishmen to the Confederate cause. Seeking to ‘raise a company of IRISH REBELS to enter into Confederate service’ Ryan went for the resonant, claiming that ‘Oliver Cromwell lives again in the person of Abraham Lincoln. Should they succeed in capturing Charleston the butcheries of Drogheda will be repeated on our streets.’

The most celebrated Irish Confederate military figure, Patrick Ronayne Cleburne, the Cork-born ‘Stonewall of the West’, is given his due. A guest of Her Majesty on Spike Island at around the same time as John Mitchel – Cleburne as a serving soldier, the Young Irelander awaiting transportation – Cleburne was the highest-ranking and probably the most effective Irish-born commander on either side in the Civil War. Robert E. Lee himself said of the Corkman that he ‘shone like a meteor in a clouded sky’. At the age of 21 he emigrated to the USA and settled down in Helena, Arkansas. Like most Irish combatants he did not own slaves and professed to see the issue of slavery as a distraction. To Cleburne the cause of the Confederacy was that of ‘independence’.

He was an unfortunate fatality of the conflict in more ways than one. He was killed at the Battle of Franklin in 1864 but long before that he had originated a proposition to recruit slaves into the Confederate army. Their reward was to be a highly circumscribed form of post-war emancipation. Cleburne’s petition to this effect, signed by a number of other senior officers, was forwarded to Richmond where President Davis curtly rejected the proposal. Cleburne, who had risen through the ranks from private to major general received no further promotions before his death.

This volume is a valuable addition to American Civil War studies.The only vague disappointment is a failure to satisfy this particular reader’s curiosity about the extent of Fenian inflitration of the Confederate army, though the role of the IRB in the immediate post-war environment is well covered.  Such a trivial reservation does not detract one iota from the comprehensive nature of Gleeson’s research and the excellence of his pioneering narrative.