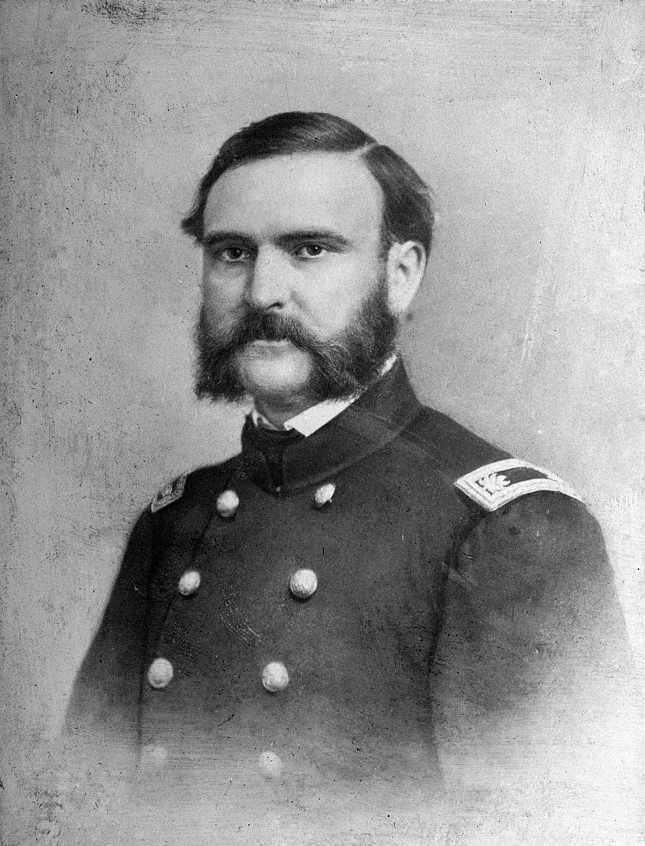 One of the great Irishmen of the American Civil War came from the town of Oldcastle, [Co.Meath.] Miles O’Reilly of the 47thNew York regiment, was twice reduced to the ranks for acts of insubordination but, otherwise, served the Union Army with distinction.

Except, of course, that he didn’t.

In reality Miles O’Reilly was a fictional character, created by a genuine Oldcastle man, the journalist, poet and soldier Charles Graham Halpine. But to the Union troops Miles was one of them, as real as General Ulysees Grant. And, on foot of his creation, for a brief period Halpine became one of the most read satirists in the USA, needling his own side in the Civil War and later, lampooning the corruption of New York City politics. He also risked his life to allow African Americans to assume a more meaningful role in the conflict.

Halpine was born in 1829. He was the son of Rev. Nicholas John Halpin a Church of Ireland curate in Oldcastle, Co.Meath who doubled as editor of the militantly unionist and Protestant Dublin Evening Mail who might not have been happy that his son was born in the year of Catholic Emancipation. Halpine flunked out of Trinity College at an early age and tried his luck, first in London, and then in New York. In the latter, his talent as a writer quickly emerged and had then to be set aside when the American civil war began in 1861.

Halpine possessed a wicked sense of humour. He was an accomplished literary hoaxer. A case in point, his most outrageous coup, involved a notorious pirate named Albert W.Hicks, who was the last man executed for piracy in the USA. He was hanged on Bedloe’s Island – where the statue of Liberty now stands – on 13 July 1860.

Halpine, bored with the news of the day, invented a story claiming that Hicks had been resuscitated after his hanging, and was making ready to exact retribution on the people of New York. Like Orson Welles and his infamous War of the Worldsbroadcast, the report caused consternation. For years afterwards there were people who believed that Hicks had actually made his escape, post mortem, from Bedloe’s Island.

After enlisting in the Union army in 1861 Halpine found himself operating as adjutant general in the staff of the maverick Union general David Hunter in South Carolina. Hunter, unilaterally and without Federal approval, began to recruit black soldiers around South Carolina and formed the first black unit in the Union army, the 1stCarolina (Africa descent). When this was challenged in Congress, and the black soldiers were described as ‘fugitive slaves’ Halpine was recruited to write a riposte to Hunter’s opponents. He rose to the occasion in style, describing Hunter’s recruits as:

For that, and related offences, Halpine and Hunter were placed on a Confederate death list, to be hanged immediately upon capture.

But his signature contribution to the war effort was the creation of the entirely fictional, but thoroughly believable, Private Miles O’Reilly, whose military career was avidly followed by readers of the New York Herald.

O’Reilly was a bad poet given to sarcastic gibes on the course of the war and the complete uselessness of the generals who were fighting it.  Halpine had him ‘clapped in irons’ for a poem about an overcautious Union Admiral, Rear Admiral John A.Dahlgren, or Dahlgreen as Miles labelled him for rhyming purposes. Dahlgren liked to preserve the integrity of his ships by never actually sending them into battle.

Miles was cashiered for writing this little ditty.

It’s aisy to be seen

That seasick you’ve never been

Your fleet is built for speed

What a pity that it never leaves the shore’

Halpine then has Miles pardoned by the President himself who immediately summons the Bard of Oldcastle to the White House to discuss policy. There Miles addresses Lincoln in the following terms.

Private O Reilly says that he was born at a place they call Ouldcastle . . .       and he is emphatic in declaring that he and seventeen of his O’Reilly          cousins, sixty-four Murphy cousins, thirty-seven Kelly cousins, twenty-        three Lanigan cousins. together with a small army of Raffertys,    Caffertys, Fogartys, Flanigans, Bradys, O’Rourkes, Dooligans, Oulahans,          Quinns, Flynns, Kellys, Murphys, O’Connors, O’Donnells, O’Driscolls,         O’Mearas, O’Tooles, McCartys, McConkeys, and McConnells— all his         own blood relations, many of them now in the service, and all decent   boys—would be both proud and happy to enlist or re-enlist for twenty years, if his Reverence’s Excellency the President would only oblige         them by declaring war . . .  against England.’

As it happens Halpine himself had met Lincoln on many occasions when he was assigned to work with the general staff in Washington. He regularly visited the White House with documents requiring Lincoln’s signature. The President had actually discussed with Halpine the possibility of being assassinated and described how easy it would be to murder him.

After the war Halpine continued to operate behind his alter-ego and turned Miles  on the corrupt machine politicians of New York. Sadly a burgeoning political career – Halpine’s not O’Reilly’s – ended when he died prematurely at the age of only thirty-eight. Had he lived he was set fair to become a significant figure in post-war American politics or letters, whichever he chose.

Charles Graham Halpine, creator of the pugnacious Meathman, Miles O’Reilly, died one hundred and fifty years ago, on this day.