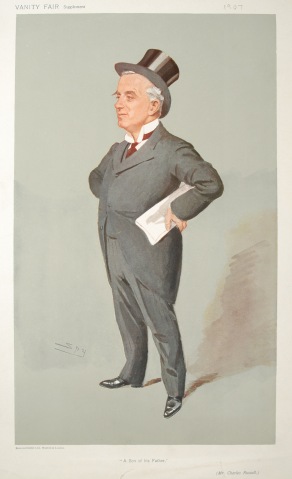 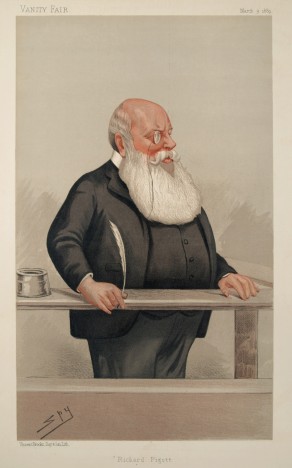 Born plain Charles Russell, in Newry, Co.Down, the man who would become Baron Killowen and who would torment Richard Pigott in the witness box in his defence of Charles Stewart Parnell, was one of five children. He was also the only sibling in the Russell family who did not enter the religious life. His three sisters all became nuns, his brother a Jesuit priest.

He was a highly successful QC in London, a moderate nationalist MP, and rose to become Lord Chief Justice of England, the first Catholic t hold the office in centuries. However, it is for his forensic grilling of the dubious journalist, turncoat and pornographer Richard Pigott at the Times Commission hearings in February 1889 that he is justly celebrated.

Pigott had sold the Times a pup … at least twice over.  He had passed on, for payment, a letter that suggested Parnell supported those who carried out the brutal Phoenix Park murders of Chief Secretary of Ireland, Lord Frederick Cavendish, and Under Secretary Thomas H.Burke in May 1882. Parnell vehemently denied the veracity of the letter. A Commission was established which, in essence, pitched the Times newspaper against Parnell and most of the senior members of his party.

The letter in question, published in facsimile by the Times in April 1887, was one of a number that had been forged, quite cleverly, by Pigott himself.  He had, however, left a couple of hostages to fortune in the material he had supplied to the Times. Pigott was not quite as literate as one might have expected a former newspaper editor to be. He was a dreadful speller.  Observers who closely examined the cache of correspondence he had provided to the Times noted a couple of howlers.  In one case, for example, he had spelt the word ‘hesitancy’ as h-e-s-i-t-e-n-c-y.

When he began his cross-examination of this crucial Times witness Russell puzzled the onlookers by handing Pigott a sheet of paper and asking him to write a number of words on it. One of those was ‘hesitancy’. He then casually took back the paper, glanced at it, and ignored it for most of the next two days.

It was only after reducing Pigott to a gibbering wreck and catching him out in his elaborate system of lies, that Russell returned to the mysterious paper. After a few more barbed questions he pointed out that in one of the letters retained by the Times the word hesitancy had been misspelt. The erroneous spelling, he demonstrated, was precisely that chosen by Pigott the previous day when asked to do so by Parnell’s counsel. Pigott went a couple of stages beyond gibbering wreck and no one in the court had any doubt but that he had forged all the letters upon which the Times depended to make its case.

Pigott fled shortly after the court adjourned, admitted his guilt in a letter to the tribunal and shot himself dead in Madrid. Parnell subsequently sued the Times for defamation in a London libel court and won £5000. In future years at public meetings when a heckler wished to suggest that a platform speaker had ‘sold out’ or betrayed his cause, the aggrieved party would yell ‘spell hesitancy’ at the top of his voice.

Charles Russell, inquisitor extraordinare and nemesis of the hapless Richard Pigott was born 181 years ago on this day.