When we think of plane crashes and Aer Lingus the one that immediately comes to mind is the mysterious 1968 Tuskar Rock disaster where a Viscount aircraft, named St.Phelim, flight EI-712, fell from the sky as it cruised towards the coast of Wales in circumstances that are, as yet, largely unexplained. For years rumours abounded that the St.Phelim had been downed by a missile launched during a British military exercise. In recent years an investigation has suggested that the reason for the crash was more banal, involving simple structural failure.

But the Tuskar rock crash was not a first for Aer Lingus. The company began operations in May 1936 – it was almost 16 years before its first fatal air disaster, in January 1952. It was one of 65 fatal crashes that year. To put that figure in some perspective, over the last three years, with air traffic having increased exponentially since the 1950s, there has been an average of 35 fatal incidents a year.

On 10 January, 1952 at twenty five minutes past five in the evening the St.Kevin, a DC-3, flight EI-AFL, took off from Northolt Airport near London. Northolt, now an RAF base, was being used by commercial aircraft during the construction of Heathrow. The weather was bad, and got worse as the aircraft approached the Welsh coast. The rain was torrential and the winds were close to gale force

Shortly after seven o’clock the pilot, Captain James Keohane, reported to the Nevin Radio station south of Anglesey that he had reached the Irish Sea and requested permission to descend from 6500 feet to 4500. It was the last ever transmission from the St.Kevin. It’s intended route should have taken it 15 miles south of Mount Snowdon. In fact, far from being over the Irish sea, the plane was heading almost directly towards the 3650ft high peak. A few minutes later it crashed into the bleak and bare Cwm Edno valley a few miles from the highest point in Wales. All twenty passengers on board and the three crew members were killed.

First news of the disaster came with a telephone call to Carnarvon police from two locals who told of having seen and heard a plane crash.

Rescuers reported a scene of utter devastation when they reached the crash site after first light the following morning, having climbed for almost an hour to get there. Sections of the wreckage and many of the bodies had been sucked into the marshy soil of the high valley. One poignant account reported how a child’s doll had been thrown clear of the burning wreckage and how that distressing sight had particularly upset the recovery party. The doll belonged to five-year old Melody Laker. Her parents were also on board, having decided at the last minute to take their daughter with them to Ireland. Her father, Michael was himself an Aer Lingus pilot.

Among the other victims was a 16 year old German girl, Lily Wenman, on her way to Dublin to live with her grandmother, Evelyn Belton, cousin of a former Lord Mayor of Dublin and the 23 year old air hostess, Deirdre Sutton, who had only been working for Aer Lingus for two years.

Accident investigators concluded that ‘the encountering of a powerful down-current of air on the lee-side of Snowdon forced the aircraft down into an area of very great turbulence where the pilots lost control.’

At the time of the accident it was one of the tenth worst in British aviation history – even today it remains in the top thirty.  Twelve of the victims of the crash, including Captain Keohane, Melody Laker and her mother Dorothy, are buried in a communal grave in the parish cemetery of Llanbeblig in Carnarvonshire. Michael Laker’s body, like that of a number of other victims, was never recovered. A stone memorial was placed in the ground close to the crash site at Cwm Edno in the wild and beautiful Snowdonia National Park.

The St.Kevin made its final fateful flight from London to Dublin 62 years ago on this day. 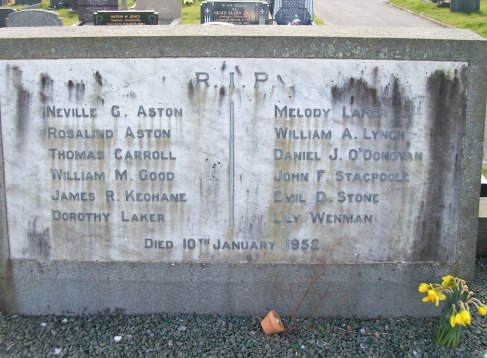