When the singer songwriter Don McClean, creator of American Pie – the song, not the film – had an international hit with The Mountains of Mourne, most of his worldwide fans assumed that he had written it himself. Few, outside of Ireland,  had ever heard of Percy French, humorist, civil engineer, songwriter, landscape painter, banjo player, poet, inspector of public drains, and sometime musical hall performer.

French was born in Cloonyquinn House, Roscommon in 1854, into a landowning family. He wrote his first song, Abdul Albulbul Amir before he even went to university and had an early experience of what it was like to be ripped off when he sold it for £5 and later saw others claim it as their composition.

After leaving Trinity College, Dublin in the mid 1870s he took a job for the Office of Public Works in County Cavan inspecting drains. During his time peering into other peoples sewage he also wrote many of his most famous tunes and painted prodigiously.

His employment with the OPW lasted until 1887. He was laid off when the organization downsized. To keep body and soul together French decided to combine some of his emerging talents and established a comic magazine, The Jarvey. It was when that unhappy enterprise failed after a couple of years that he really launched his career as a songwriter and entertainer.  This was in spite of the huge tragedy of his life when he lost his young wife, Ettie, in 1891. She died in childbirth at the age of twenty and their baby daughter died a few days later. French re-married in 1894 to Helen Sheldon and went on to have three daughters.

His better-known songs are generally comic or sentimental. The Mountains of Mourne, a story of emigration and nostalgia, was written in 1896. His hymn to the county that first employed him, Come back Paddy Reilly to Ballyjamesduff was penned in 1912. An excellent statue of French can be found sitting on a park bench in the main street of Ballyjamesduff. By the early 1900s he was a popular music hall performer, touring the world with his partner and accompanist Dr.W.Houston Collison.

His most famous comic song was written as sweet revenge. Are you right there Michael famously parodies the notoriously tardy West Clare railway. In 1897 French travelled on the line from an engagement in Sligo to one in Clare – the service was so slow, with the driver making numerous unexplained and unscheduled stops, that by the time French arrived at the venue for the 8.00 pm recital the audience had gone home. He was unsuccessfully sued by the West Clare railway for libel, based on the subsequent ridicule to which they were subjected.

An anecdote, probably apocryphal, but too good not to recount, tells of how French was late for his day in court. On being admonished by the judge he replied, ‘I apologise your honour, but I travelled here by the West Clare railway’.

Percy French, died 94 years ago, on this day. 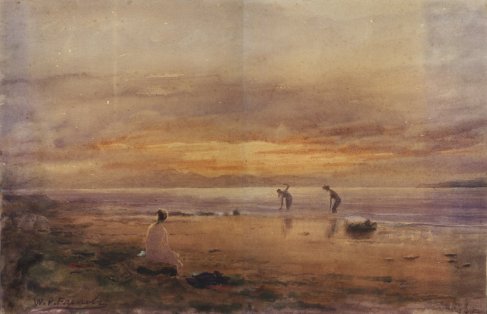