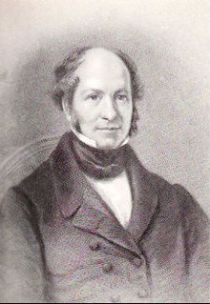 Not many people see statues unveiled to themselves in their own lifetimes. William Dargan, however, was one such person. Born into the family of a tenant farmer in Co.Carlow in 1799 and educated in a local hedge school, he went on to become the most important Irish engineer of the 19th century and one of the country’s most significant entrepreneurs and philanthropists.

Showing early promise as a mathematician he trained as a surveyor thanks to the generosity of, among others, the MP Henry Parnell. Later he found work with the famous Scottish engineer Thomas Telford in the building of the London to Holyhead road in the early 1820s. Moving back to Ireland he earned the large sum of  £300 for his work on a new road from Raheny to Sutton near Dublin. This served the Howth mail-packet station. The money was used as seed capital to fund many future projects. These included the building of Ireland’s first railway line in 1831, from Dublin to what was then Kingstown and what is now Dun Laoghaire.

While Dargan did not acquire the same sort of reputation as an employer as another well-known Irish railway builder, William Martin Murphy, he did manage to antagonize some of his workers into a week-long strike during the construction of the Dublin-Kingstown line. The strike ended when he agreed to pay his employees based on their productivity. Unconnected with the strike, Dargan’s workers managed to scandalize some of the delicately nurtured inhabitants of South County Dublin by bathing in the sea during their lunch breaks in what was described as ‘an indelicate state’.

Dargan was responsible for the construction of almost 1000 miles of railway line in Ireland and for the building of, amongst other huge projects, the Ulster Canal between Lough Erne and Lough Neagh. He also reclaimed land in Belfast Lough on which now stands the Harland and Wolff shipyard.

Dargan, although well insulated by his growing wealth, lived through the horrors of the Great Famine. He was instrumental in restoring some of the country’s morale in the wake of that catastrophe when he spent £100,000 on the Dublin Industrial Exhibition of 1853 located on what is now Leinster Lawn, overlooking Merrion Square. The exhibition ended up costing him £20,000. At its conclusion a new National Gallery was built on the site. Today the gallery contains a Dargan wing, and that statue of the great engineer, which was erected near the front entrance and unveiled in 1863. The iconic Luas bridge in Dundrum, completed in 2004, is also named after him. The Nine Arches viaduct in Milltown, still used today in running the Luas line, is yet another Dargan construction.

As would William Martin Murphy in 1907, Dargan declined a knighthood more than half a century before. In 1853, on one of her four visits to the country Queen Victoria actually came to call on Dargan in his mansion at Mount Anville. She sought to make him a baronet. Again he declined the offer.

Dargan was renowned for his humanity and his generous dealings with businesses on the brink of extinction during and after the Famine. This may not have been entirely altruistic. He is reputed to have observed on occasions that ‘A spoonful of honey will catch more flies than a gallon of vinegar.’ When he died in 1867 he had acquired a reputation as ‘The Workman’s Friend’ having provided employment to thousands – his funeral was, reportedly, the largest in Dublin since that of Daniel O’Connell twenty years before.

William Dargan, railway builder, businessman and philanthropist was born 215 years ago, on this day.