It was Monday 1 August, 1932. In one glorious hour at the Olympic Stadium in Los Angeles Ireland won two track and field gold medals. The second gold was won by hammer thrower Pat O’Callaghan, a surprise champion in 1928 when, as a relative novice, he had only been included in the Irish team to gain experience of top class competition. There was no surprise at all at his follow-up victory four years later.

The first of the two medals, however, was won by a tall, handsome 400 metres hurdler, Robert Morton Tisdall. Born in Ceylon, now Sri Lanka, Tisdall was brought up in Nenagh, Co.Tipperary – home to two previous Irish Olympic gold medallists Johnny Hayes and Matt McGrath, who had competed for the USA in the early 1900s at a time when there was, of course, no Irish Olympic team.

Tisdall had the right pedigree. His father had been an Irish sprint champion and his mother had played hockey for Ireland. The 25 year old Tisdall had given up a pretty fabulous job just to compete in Los Angeles. He had landed on his feet during the Great Depression by becoming an aide to a wealthy young Indian Maharajah on an extensive European tour. That plum job went by the board in the fulfillment of the dream of Olympic success.

Tisdall had already shown athletic promise at the University of Cambridge where he managed to win four events in the annual encounter with Oxford – he finished first not only in the two hurdle races but in the long jump and, bizarrely, the shot putt. In the lead up to the LA Games Tisdall was, essentially, a low hurdles runner over 220 yards. But in 1932, never having actually run in the event, he wrote to the President of the Olympic Council of Ireland, Eoin O’Duffy – taking time off from his duties as Ireland’s leading fascist – and asked to be considered for selection for the 400 metres hurdles. Tisdall qualified to compete in the event by winning the national 440 yards hurdles event in Croke Park in 1932.

His training in California was not ideal. There were no hurdles available at the team training camp – so he collected driftwood and improvised hurdles on a greyhound track. This took quite some time – just as he got ready for his first run someone switched on the mechanical rabbit. One by one the electronic bunny smashed his driftwood hurdles. Tisdall eventually found a track WITH hurdles at a local girls school where he was allowed to train.

He won his heat with considerable ease. You can actually see a recording of his semi-final victory on YouTube. It’s quite amazing how easily he won this race as well, almost jogging to the line after the last hurdle, running from the outside lane. Astonishingly, after virtually pulling up and walking home nonchalantly, he still equalled the Olympic record . It was Tisdall’s fifth ever run in the event.

In the final he faced three Olympic gold medallists, Glenn Hardin and Morgan Taylor of the USA and David Cecil, Lord Burghley of the Great Britain. He creamed the lot of them, setting a new world best time in the process and becoming the first 400 metres hurdler to break 52 seconds. Ironically though it was silver medallist Glenn Hardin who was credited with a new world record of 51.85 – Tisdall had knocked over the final hurdle and under the rules, changed not long afterwards, he was denied the record.

But he took consolation in his magnificent gold medal and in the fact that at a subsequent gala dinner in Los Angeles he found himself seated between the celebrated aviator Amelia Earhart and the Hollywood star Douglas Fairbanks Jr.

Tisdall, who brought honour and pride to a newly-created state, barely a decade in existence at the time, lived to be 97 years of age. He had run in the Sydney Olympics torch relay at the age of 94. Robert Morton Tisdall, Irish Olympic gold medallist was born, 107 years ago, on this day. 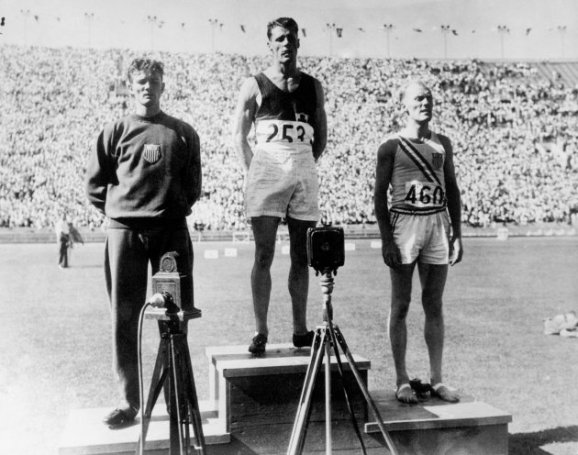