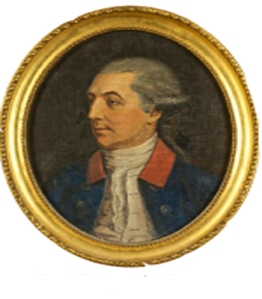 Today the tale of a banker who didn’t manage to destroy the country while in pursuit a fat bonus. David La Touche, born in 1729, was the grandson of a Huguenot officer in the army of William of Orange.

La Touche married the cousin of the great 18th century Irish politician Henry Grattan, the man who had a parliament named after him, though it didn’t even last 20 years. Elizabeth Marlay – Mrs. La Touche – is unwittingly remembered today by thousands of Dubliners who live in the shadow of the Dublin mountains because of the park in Rathfarnham that is called after her. This was actually the home of the La Touche family for many years. Its grounds were laid out by David La Touche in the 1760s.

The house is modest enough by the standards of the day – it would merely be an annexe of Carton or Castletown – but it did have its own private theatre. There Henry Grattan and Henry Flood, champions of the quasi-independent Irish parliament of the late 18th century, once performed in Shakespeare’s Macbeth. Their involvement in a production of the infamous ‘Scottish play’ – bringer of bad luck to all who sail in her – may well have contributed to the Act of Union that saw their grand project go the way of the dinosaur and the dodo.

Despite having married Grattan’s relative La Touche had no qualms in voting for the abolition of Cousin Henry’s Patriot parliament. He was one of three La Touche brothers to sit in the Irish parliament. The others voted against the Act of Union. Many of those who supported the abolition of the Irish parliament were rewarded with large sums of money and posh titles, or at least posher titles than the ones they had already. After 1800 La Touche was still plain old David La Touche so he might well have voted to abolish the College Green parliament based on, shockingly, political conviction. He would also have been difficult to bribe as by then he didn’t need the money.

That was because he ran the family bank for a number of years. The La Touche bank had been established by David’s father, also called David La Touche – they weren’t very imaginative when it came to first names, possibly because the surname was more than sufficiently exotic for 18th century Ireland. The family bank was one of the few such institutions to survive a serious financial crisis in the 1750s. In the late 19th century it had the misfortune to be merged with the Munster Bank. Just over a decade later the Munster Bank – a forerunner of AIB – went bust while under the guardianship of the former politician William Shaw. But David La Touche also swam in the gene pool that became the Bank of Ireland.  In 1783 he helped to draft the charter of the Bank of Ireland, in which his family initially held a major shareholding – nothing like Sean Quinn in Anglo of course, but just under 10% nonetheless.

La Touche was also Deputy Grand Master of the Freemasons and not a fan of Catholic Emancipation. He voted against giving Catholics the vote in 1793.