It has become known as the ‘Old Lady of South King Street’. The Gaiety is now a venerable theatre which has managed to survive some lean times and very stiff competition and remain with us today. In 1871, however, it was brand new, luxurious, well-appointed, and it accommodated almost 2000 people, 700 in the pit and stalls, 200 in the balcony, 210 in the upper circle and a further 700 in the gallery – known to one and all as ‘The Gods’ because the seats were closer to heaven than they were to the stage and patrons required the eyesight and hearing of an all powerful deity to follow what was going on many metres below them.

Despite competition from the Olympia, which opened eight years later, and other sizeable venues, like the Theatre Royal, the Gaiety quickly became a fixture on the Dublin scene, attracting many visiting companies like that of the great actor-manager Henry Irving and the d’Oyly Carte Opera, spiritual and contractual home of the works of Gilbert and Sullivan.

The Gaiety was not unaffected by the various excitements of the revolutionary decade. During the Easter Rising members of the Rathmines and Rathgar Musical Society, another bi-annual tenant, had been ‘trapped’ in the Shelbourne Hotel by the hostilities. There are, it has to be said, far worse places to be imprisoned, and the Shelbourne was out of range of the revolver prominently sported and rebelliously employed by the excitable Countess Markievicz, second in command around St.Stephen’s Green during the rebellion. At least the R&R was only in rehearsal. The d’Oyly Carte had already arrived in force for their traditional Easter week shows at the Gaiety when Pearse, Connolly, Plunkett and units of the Irish Volunteers and the Irish Citizen’s Army took over the GPO. As fortune would have it the Gilbert and Sullivan players and stage crew had been booked into the Gresham hotel across the road in Sackville street for the week. Discretion proving to be much the better part of valour the company members never left the hotel and the Gaiety, sadly, did not ring to the strains of I am the very model of a modern major general or A policeman’s lot is not a happy one that Easter.

Two names are most associated with the theatre. Louis Elliman, son of Russian Jewish parents, bought the theatre in 1936 and held it for almost thirty years. The Gaiety was only one of Elliman’s entertainment interests. He also had an association with the Theatre Royal and later co-founded Ardmore studios with WW1 and Irish civil war veteran Emmet Dalton in 1958. The following year his main theatrical venue was mired in a controversy involving, naturally enough, the Roman Catholic Archbishop of Dublin, John Charles McQuaid and the staging of an adaptation of

J.P.Donleavy’s controversial novel The Gingerman. The play, due for a two week run, was pulled after three nights. According to Donleavy himself Elliman was visited by McQuaid’s private secretary who requested, or advised, him, to close the show down. Elliman, opted to comply rather than take on the crozier.

Were it not for the intervention of the second saviour of the Old Lady of South King Street in 1965 the Gaiety might now be an office block or a very expensive car park.

The venue faced stiff competition not just from other theatres but from cinema and television. In the final five years of the reign of Louis Elliman only seven productions turned a profit for the Gaiety management. Elliman died in November 1965 at the age of 59. The Gaiety, fortunate to survive as a theatre, was sold in 1966 and was, at the time of its centenary, being run by Eamon Andrews studios in the shape of the redoubtable Fred O’Donovan, a worthy successor to Elliman. He held the reins for almost twenty years and, with the help of Maureen Potter, heir to the great Jimmy O’Dea, the Gaiety survived.

In its latter years one of the theatre’s most entertaining, if bizarre, moments was when it re-opened after re-furbishment with a ‘Night of 100 Stars’ in October 1984. One of those stars was either an idiosyncratic or intoxicated Peter O’Toole whose five-minute slot reading an extract from Swift’s Modest Proposal morphed into a twenty minute rendition of the entire essay. This led to hisses, catcalls and walk-outs from members of the well-heeled audience. They were either offended by the Hollywood star’s invocation of 18th century Dublin poverty, or bored by the length of time it took him to read the viciously satirical piece, advocating the fattening and slaughter for profit of babies by impecunious Dubliners as a handy source of revenue.

The Gaiety theatre opened its doors for the first time 143 years ago, on this day. 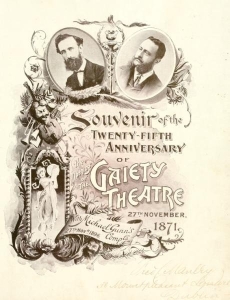