This is a guide to a small percentage of the music recorded in the USA which was related to the Great War. It is confined to material discussed by historians Glen Gendzel (San Jose State University) and John Borgonovo (University College, Cork) for a segment which did not make it into the final edit of a two part series I have compiled and presented for Lyric FM called ‘From Tipperary to Salonika: Ireland the the music of the Great War’. The programmes will be transmitted by Lyric in the Lyric Feature slot at 7.00 pm on Friday 13 February and Friday 20 February. You will be able to ‘listen back’ to the two broadcast programmes on the Lyric FM website [http://www.rte.ie/lyricfm/] and you will also be able to listen to Glen and John talk about songs like I didn’t raise my boy to be a soldier, Over there, Stay down here where you belong  and many more.

Songs written in opposition to WW1 recruitment were, of their nature (because they were illegal under the Defence of the Realm Act) never published or widely performed in public.

One notable exception to the lack of published anti-recruiting material was, of course, the USA where, before its entry to the war in 1917, there was strong anti-war sentiment, particularly amongst Irish and German Americans.

There was also a vibrant if patchwork ‘left’ which was opposed to the imperial nature of the conflict. The latter strain was reflected in the tunes recorded in The Little Red Songbook, first produced in Spokane, Washington in 1909 by the Industrial Workers of the World, or the ‘Wobblies’. The famous Swedish-American labour activist Joe Hill contributed a number of songs, including an anti-war song Don’t take my papa away from me.

Typical of the genre was the song Christians at war by John F.Kendrick published in the March 1916 ‘Joe Hill Memorial’ edition of the Little Red Songbook [Hill had been dubiously convicted of murder in 1915]. It doesn’t pull too many punches

Slay your Christian neighbors, or by them be slain,

God above is calling you to rob and rape and kill,

All your acts are sanctified by the Lamb on high;

If you love the Holy Ghost, go murder, pray and die.

A rather gentler example of the genre was I didn’t raise my boy to be a soldier with lyrics by Alfred Bryan and music by Al Piantadosi, published around the same time. This one centres around the figure of the [potentially] grieving mother.

Ten million soldiers to the war have gone

Who may never return again,

For the ones who died in vain.

Head bowed down in sorrow

In her lonely years

I hears a mother murmer thro’ her tears.

Then the chorus comes in …

I didn’t raise my boy to be soldier

I brought him up to be my pride and joy

Who dares to place a musket on his shoulder

To shoot some other mother’s darling boy?

It’s time to lay the sword and gun away,

There’d be no war today

If mothers all would say:

“I didn’t raise my boy to be a soldier.”

The response of Theodore Roosevelt to the song was to suggest that the place for women who opposed war was “in China—or by preference in a harem—and not in the United States.”

According to the publisher I didn’t raise my boy to be a soldier sold 700,000 copies in the first eight weeks of release. The first recording, by Morton Harvey, was coupled with an Irving Berlin song Stay Down Here where you belong which was recorded in an isolationist America in 1915 by Henry Burr

Stay down here where you belong

The lyrics depict a conversation between the devil and his son – the devil urges the son to “stay down here where you belong” because people on Earth do not know right from wrong. His son wants to go ‘up above, up above’.

[Refrain:] Stay down here where you belong

To please their kings they’ve all gone out to war

Kings up there are bigger devils than your dad

– to Berlin’s constant irritation Groucho Marx refused to let Stay down where you belong go away and sang it regularly – according to Groucho, Berlin offered him $100 to stop singing the song – but he was still doing it in the 1970s and it was included on one of his final concert albums An Evening with Groucho[1] – there’s also a You Tube clip of him singing it on the Dick Cavett Show in 1971 – with, they both claimed, Irving Berlin watching on TV.  [https://www.youtube.com/watch?v=9WTkzBRbtZA&feature=kp]

Berlin atoned for Stay down here where you belong in 1918 with God bless America [originally written for military musical Yip Yip Yaphank – Yaphank was in Long Island, site of Camp Upton – a product of Berlin’s conscription into the US Army ‘Army takes Berlin’ was one waggish newspaper headline]–

One of the songs in Yip Yip Yaphank possibly testifies to the greater acceptance of slightly more subversive material in the USA than GB – the show included the song How I hate to get up in the morning.

This included the lyric …

And step upon it heavily

And spend the rest of my life in bed

The thriving US anti-war song genre included Daddy please don’t let them shoot you, Don’t take my darling boy away and If they want to fight, all right, but neutral is my middle name.

Perhaps the most interesting of all was Don’t blame the Germans written in 1915 by John J.Donahue – a song written by an Irish-American and obviously aimed at his own community and that of ethnic Germans in the USA. The song begins by appealing to the American sense of fair play with a major statistical porkie … 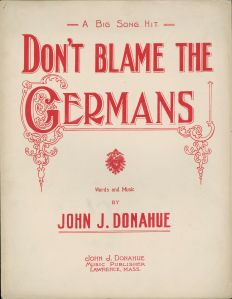 Don’t blame the Germans for it isn’t right

Remember they are one to five in this gigantic fight

With the Allies all against them, yet they hold their own

It continues by appealing to Irish prejudices and to a revisionist trope that had emerged from Germany itself by 1915, the notion of ‘perfidious Albion’ really being at the heart of the conflict – that England was to blame for the war.

Must very soon surrender for they know they can’t succeed