It’s one of the most popular ‘what ifs’ of the last fifty years. ‘What if it had been raining on 22 November 1963 in Dallas?’

Obviously there would have been no Presidential open-top motorcade and Lee Harvey Oswald – or the Mafia, or the man on the grassy knoll, or the four French hired assassins from Marseilles, or whatever other conspiracy theory you subscribe to – would have been denied the opportunity to demonstrate his or their peerless marksmanship and John Fitzgerald Kennedy, 35th President of the United States of America, would probably have seen out his first term and been re-elected in November 1964.

JFK was originally elected with just over 49% of the popular vote in the 1960 race for the White House with Richard Nixon. While in office his popularity rarely dipped below 60%. After the Cuban missile crisis his ratings were in the high 70s. In a poll of 1960 voters taken after his death 70% claimed to have chosen him as President.

Of course there’s another great ‘what if’ when it comes to the career of John F.Kennedy. What if his older brother Joseph Kennedy Jr, had survived World War 2? Would John F have become Bobby, his older sibling’s loyal Doberman, rather than Senator and President?

He was arguably, the first conscious political ‘brand’. With iconographers like Theodore Sorenson and Pierre Salinger cultivating and honing the Kennedy narrative he could hardly fail. Fifty years later he is a mythic figure. Myth=branding + time.

But the skein of myth is easily unravelled.

For example, he wasn’t even the youngest American president. When Theodore Roosevelt took over the office after the assassination of William McKinley in 1901 he was nine months younger than Kennedy.

And his credentials as a supposed political progressive don’t stand up to too much examination. In 1957 he opposed Eisenhower’s civil rights legislation. He persisted, when in office, with the Democratic party practice of appointing dodgy judges to federal courts in the south. One such JFK appointee, a man called Harold Cox, once described African Americans as ‘chimpanzees’ after he had been elevated to the federal bench.

During his first term as a senator Kennedy teamed up with the darling of the Republican right, Barry Goldwater, to try and keep rock and roll music off American radio stations. He presided over the assassination of a supposed ally (and fellow Catholic) in Ngo Dinh Diem, beleaguered president of South Vietnam.

Take just one month of his Presidency – June 1963. On June 10 this apparent cold war warrior made a major foreign policy speech at the American University in Washington DC. In a world dominated by ideas of mutually assured destruction he appeared to extend an olive branch to the Russians.

The following day, after Governor George Wallace of Alabama was forced by Federal intervention to, quite literally, step aside and allow two African American students pass into the campus of the University of Alabama, Kennedy made a largely improvised address on national radio and TV, promising equal access to public schools and enhanced voting rights, to African American citizens.

Then on 26 June he made his famous ‘Ich bin ein Berliner’ speech (the ‘ein’ was superfluous) a short time after viewing the newly erected Berlin wall. Oh, yes, and, of course, he dropped into Ireland for four days on his way home.

Not a bad month’s work really.

John Fitzgerald Kennedy, 35th President of the USA, was born 98 years ago, on this day. 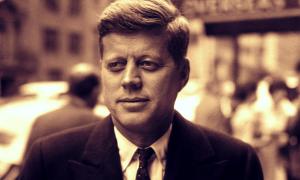