James Shields from Co.Tyrone was an extraordinary Irishman though his name is virtually unknown in his native country. He had an uncle of the same name who emigrated from Ireland and became a U.S. senator for Ohio. Not to be outdone James Shields Jr. left Ireland at the age of twenty and went on to represent not one but three states in the U.S. Senate. A unique achievement unlikely ever to be repeated.

He started in Illinois – where he had also been a State Supreme Court justice. From 1849 he served one term as a US Senator. His election was helped by what came to be known as the ‘lucky Mexican bullet’. This he had stopped while a brigadier general in the Mexican-American war in 1846. His opponent for the Illinois seat was the incumbent Sydney Breese, a fellow Democrat. A political rival wrote of Shields’s injury “What a wonderful shot that was!  The bullet went clean through Shields without hurting him, or even leaving a scar, and killed Breese a thousand miles away.” He is also unusual in that he replaced himself in the Senate. When he was first elected it emerged that he had not been a citizen of the USA for the required nine years. He had only been naturalized in October 1840. So his election was declared null and void. However, he would have been entitled to take his seat after a special election was called to replace him, as he had, by then, been naturalized for the required period. So he stood again and won the seat for a second time.

Failing to be re-elected six years later he moved to what was then the Minnesota ‘territory’ from where he was returned in 1858 as one of the new state’s first two senators after Minnesota achieved statehood. Later, during the Civil War he distinguished himself as a Union General and then settled in Missouri.

He had obviously taken a liking to the Senate chamber because he contrived to get re-elected to that house from Missouri in 1879 at the age of 73. He died shortly after taking office.

But Shields is possibly even more important for something he didn’t do.

In 1842 he was already well-known in his adopted home of Illinois. He was a lawyer and was serving in the state legislature as a Democrat. After one of those periodic economic recessions hit the nation in the 1840s Shields, as state auditor, issued instructions that paper money should no longer be taken as payment for state taxes. Only gold or silver would be acceptable. A prominent member of the Whig party, one Abraham Lincoln, took exception to the move and wrote an anonymous satirical letter to a local Springfield, Illinois newspaper in which he called Shields a fool, a liar and a dunce. This was then followed up by his wife-to-be, Mary Todd, with an equally scathing letter of her own. When Shields contacted the editor of the newspaper to find out who had written the second letter Lincoln himself took full responsibility. A belligerent Shields, accordingly, challenged the future US president to a duel. The venue was to be the infamous Bloody Island in the middle of the Mississippi river, dueling being illegal in Illinois.

Lincoln, having been challenged, was allowed to choose the weapons and set the rules. He did this to his own considerable advantage, opting for broadswords as opposed to pistols. While Shields was a crack shot he was only 5’9” in height, as opposed to Lincoln’s towering 6’4”. When the rivals finally met on 22 September 1842 Lincoln quickly demonstrated his huge reach advantage to Shields by ostentatiously lopping off a branch above the Irishman’s head with his weapon of choice.

When the seconds, and other interested parties, intervened peace was negotiated between the two men, though it took some time to placate the pugnacious Shields and persuade him to agree to shake hands with Lincoln.

The man who might have abruptly ended the life and career of Abraham Lincoln, and radically changed the course of American history, James Shields from Co.Tyrone, was elected as Senator from Missouri, 136 years ago on this day. 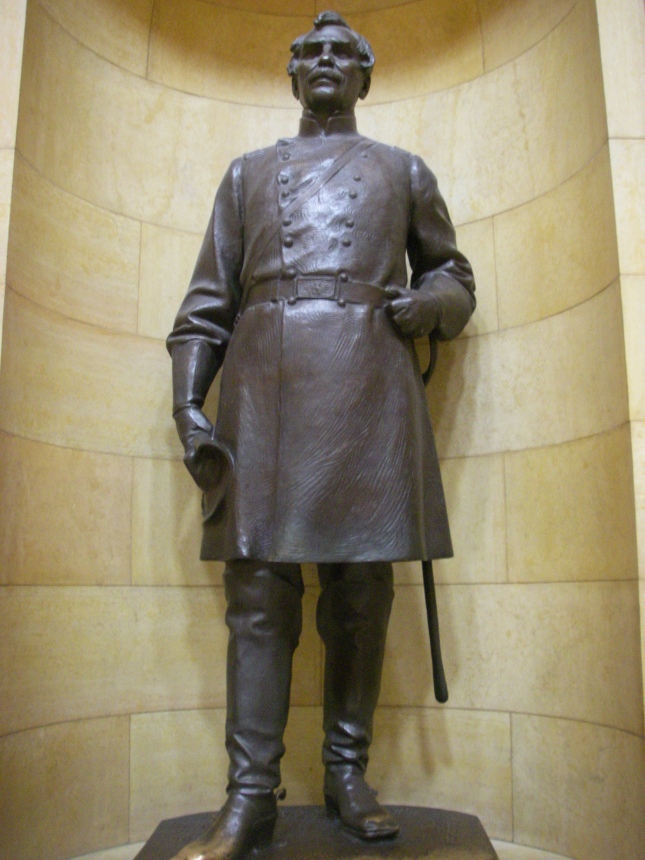