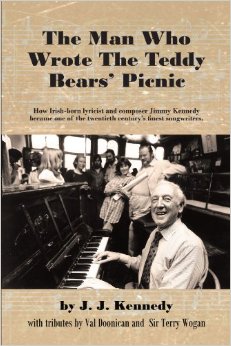 It’s always interesting to discover the genesis of a popular and memorable poem or piece of music. You assume, for example, that William Wordsworth actually based his poem about daffodils – the one that begins with the immortal line ‘I wandered lonely as a cloud’ on a field of the bright yellow blooms. And you wouldn’t be too far off.

Then there’s the sultry pop song from the 1930s ‘South of the Border’ which simply has to have been written by someone after a romantic trip to Mexico. But that’s where you’d be wrong. Its inspiration was a postcard from Tijuana. The recipient of the card was Northern Ireland songwriter Jimmy Kennedy. The song may been voted one of the top 100 Western songs of all time by the Western Writers of America but Jimmy Kennedy was closer to Tyrone than Tijuana when he wrote it.

Kennedy was born near Omagh in 1902, son of a member of the Royal Irish Constabulary, as the force was known at that time. The family later moved to Portstewart in Derry, the seaside town that would inspire another of the writer’s classic numbers. He graduated from Trinity College in Dublin, taught for a while in England and then joined the Colonial Service. But he also moonlighted with a music publisher called Bert Feldman as a pen for hire. By the end of a career that lasted half a century he had written the lyrics for over 2000 songs, many of which became international hits. For a number of years he was the most successful non-American songwriter in the USA before being supplanted in the 1960s by a pair of young Liverpool composers named Lennon and McCartney.

One of his earliest successes was with ‘Red Sails in the Sunset’. The song was inspired by the colourful sails of the yacht Kitty of Coleraine which Kennedy would often see off from his home sailing off the Derry coastline. One of the first recordings of the song, in 1935, was by Bing Crosby. Vera Lynn had a version the same year, Louis Armstrong in 1936, and Kennedy was on his way.

In 1907 a composer named John Walter Bratton had written a musical piece which his publishers entitled ‘The Teddy Bears Picnic’. But nobody thought to add lyrics until Kennedy got hold of it in 1932 and turned it into one of the most popular children’s songs of all time.

Kennedy spent the years 1939-1945 in the British Army – serving in the Royal Artillery where he reached the rank of Captain. German defences in 1939 included a chain of fortifications known as the Siegfried Line. Early in the war Kennedy wrote the comic song ‘We’re Going to Hang out the Washing on the Siegried line’ as a morale booster. The British didn’t actually get near the line until 1945 but the song was hugely popular with the troops and on the ‘home front’.

Kennedy won two Ivor Novello awards for his contribution to the music industry and an OBE in 1983. He died the following year aged 81.

Jimmy Kennedy songwriter extraordinaire was posthumously inducted into the Songwriter’s Hall of Fame nine years ago on this day.