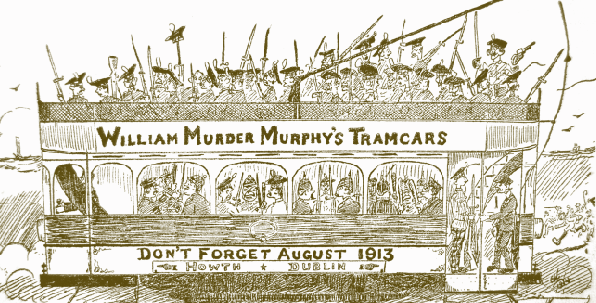 They were sometimes, for geographical reasons, known as the ‘Bantry band’. But their, often belligerent, Roman Catholic pietism also earned them the nickname ‘The Pope’s Brass Band’. Their leader may have been Timothy Healy, MP, but William Martin Murphy, entrepreneur, builder, railway-man, Member of Parliament, publisher, strikebreaker, and zealot, was one of the most influential forces within this group of Irish nationalist politicians who came from this beautiful part of west Cork.

Although Murphy inherited some wealth, and a viable building business, from his father, he quickly struck out on his own, and transformed a small fortune into a much larger one.  He turned up in some unexpected places early in his career. While he was known for having made large sums of money building railway lines in Africa, he was also on hand in Milltown Malbay, in January 1885, when Charles Stewart Parnell turned the first sod on the project that became the Ennis and West Clare Railway. Three years after breaking the resolve of the workers of the city of Dublin, he became president of the recently established Rathmines and Rathgar Musical Society. He was succeeded in this office by, in turn, his son and daughter.

His ownership of the Dublin United Tramways Company, and his leadership of the Dublin employers in their successful fight against James Larkin and the Irish Transport and General Workers’ Union, renders Murphy infamous, or celebrated, to this day. By locking out workers who refused to sign a pledge not to join Larkin’s union Murphy, in effect, starved them—and their families—into submission.

But of almost comparable significance was his involvement in the newspaper business. This began long before his ownership of the Irish Independent newspaper. In 1891, in the midst of the major political rift caused by the O’Shea divorce, Dublin members of the Parnellite faction took over the offices of the Irish Parliamentary Party newspaper, United Ireland. They ejected of its acting editor, Matthias McDonnell Bodkin, from the premises, offering him the alternative of walking out unscathed, or to take his chances being tossed out the window. The anti-Parnellite faction, which included Murphy, needed a propaganda outlet to match United Ireland. Murphy’s money funded the short-lived National Press, although his name does not appear on the list of those who subscribed to the shareholding that established it.

The National Press was little more than a vehicle for the anti-Parnellite rhetoric and vitriol of Parnell’s greatest antagonist within his own party, Timothy Healy MP.  The newspaper was responsible for a series of controversial editorials. The first of these was entitled ‘Stop Thief’. In this Parnell was accused of the embezzlement of National League funds. The party leader, it was claimed, had, for a number of years, ‘been stealing the money entrusted to his charge’. [their italics] Parnell’s unwillingness to sue the newspaper for libel was exploited in further editorials as the week went on. Emboldened by the non-appearance of a writ, on 2 June the Press reminded its readers that:

“Thief” is an unmistakable word. We called Mr.Parnell a thief. We now repeat the epithet.’.

By the time of his death in October 1891 Parnell had still not sued.  While incarcerated in Galway jail the anti-Parnellite leader John Dillon wrote that:

Loathing is the only word that can express my feeling every time I open the National Press. If that spirit is to triumph, national politics will be turned into a privy.

Later Murphy guaranteed his dominance of the Irish newspaper market when he acquired the Irish Daily Independent in 1905. He would have enjoyed the further acquisition of the old Freeman’s Journal newspaper by his company in 1924, but by then he was dead. As he had passed away five years before, he was not around to enjoy the demise of the 160-year-old Irish Parliamentary Party newspaper.

One of Murphy’s few reversals was his convincing defeat in the 1892 general election for a Dublin constituency by the pro-Parnellite candidate William Field. Murphy lost by a 4:1 margin. Field, as luck would have it, though he ran one of the largest butcher’s businesses in the city, had a background in the labour movement. Though he often expressed his opposition to socialism Field can, arguably, be cited as the only representative of labour to have given William Martin Murphy a political hiding.

William Martin Murphy, dubbed William Murder Murphy by Dublin trade unionists in 1913, was born one hundred and seventy-three years ago, on this day.