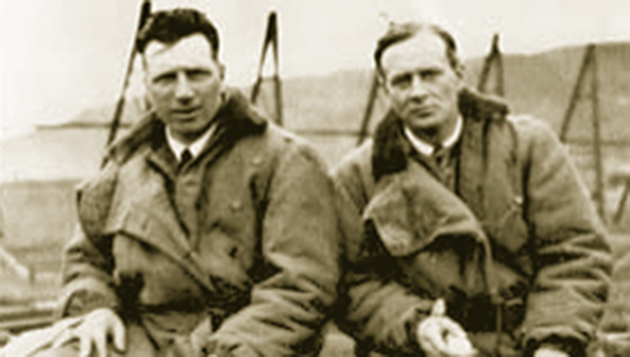 In April 1913 the Daily Mail, then a brash teenager, offered the substantial prize of £10,000 to ‘the aviator who shall first cross the Atlantic in an aeroplane in flight from any point in the United States of America, Canada or Newfoundland to any point in Great Britain or Ireland’. Nowadays if you wrote something as dull and long-winded as that for the Mail you would be fired before you had lit your pipe and started into the Times crossword.

Back in 1913 aerial flight was in its infancy and thanks to the intervention of the Great War there were no takers for the prize until well after the 1918 armistice. During the conflict two British prisoners of war, John Alcock from Manchester and Arthur Whitten Brown born in Glasgow, but also a Mancunian, had plenty of time to think about that £10,000 and what they might do with it.  Alcock had come to grief in an air raid over Turkey, Brown was a guest of the Kaiser after having been shot down over Germany. Given the state of health and safety in Great War aviation, they were lucky to be alive.

Both men became involved with the Vickers corporation in the post-war competition to be the first to make a non-stop transatlantic flight. Alcock was taken on first, as a pilot. Brown was then added to the crew as navigator.  Their main rival was a team from the Handley Page company. The relationship between the two companies was of a Tony Blair-Gordon Brown character, without the spin. Spinning is not good in aviation. The Vickers crew adapted a Vimy twin-engined bomber for the race, replacing the bomb bays with additional gasoline tanks. They carried nearly nine hundred gallons of aviation fuel.

Alcock and Brown took off from Lester’s Field, Newfoundland at 1.45pm on 14 June. They flew at between sea level and twelve thousand feet, depending on weather conditions. Brown’s navigational instincts were vital for their survival as their airspeed indicator malfunctioned early on and he had to estimate the distances being covered every hour in order to avoid flying miles off course.

They made landfall after less than sixteen hours in the air, spotting what they thought was a green field near Clifden in County Galway. It turned out to be bog. Both men emerged unscathed from the experience, having covered more than three thousand kilometres in an average speed of one hundred and eighty-five kilometres per hour.  One of the first locals to greet them was reporter Tom Kenny owner of the Connaught Tribune, who grabbed an interview before the Daily Mail correspondent could reach Derrygimlagh bog and ask the two men ‘how do you feel?’ The scoop went worldwide. Kenny’s son Des later established the world-famous Kenny’s Bookshop in Galway.  News of the successful flight was relayed from the Marconi transatlantic wireless station just a few hundred yards from where Alcock and Brown had made landfall.

The pilot and navigator were feted internationally. They did well to survive the hospitality of their Clifden hosts, and within days they were knighted by King George V. Alcock did not live very long to enjoy his share of the fame and the prize money. He died the following December at an air show in France at the age of twenty-seven. Brown lived through World War Two and died in 1948 at the age of sixty-two.

They weren’t actually the first to fly the Atlantic. A fortnight beforehand the ocean had been successfully negotiated by a US navy flying boat piloted by Lt.Commander Albert Cushing Read. But that had taken twenty-three days and involved half a dozen stops, so it didn’t qualify for the Daily Mailprize.

John Alcock and Arthur Whitten Brown set off into the unknown, for a date with history, and crash-landed in a Clifden bog, ninety-nine years ago, on this day.