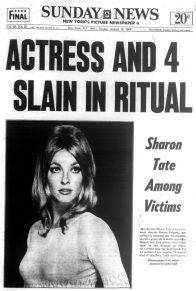 According to the writer Joan Didion the 1960s may have ended fifty years ago today. Technically she was out by four months and twenty-two days, but Didion was writing about a shocking event that banished the optimism, playfulness, and naivety of that decade. Because it was half a century ago today that a promising young actor named Sharon Tate, wife of film director, Roman Polanski, was murdered in Los Angeles. She wasn’t the only victim, four others were slaughtered along with her, as was her unborn son.

They were the victims of a  demented cult or a devious group of psychopathic killers covering up a crime committed by one of their members, that’s depending on which account you read. They were, or so the California courts were told, under the guidance and tutelage of a quasi-Messianic figure named Charles Manson, a petty criminal released from prison in March 1967. A number of personal and second-hand accounts have been written about the rampage of Manson’s acolytes—including the best-selling ‘true crime’ novel of all time, Helter Skelter by Vincent Bugliosi, who was one of the team that prosecuted Manson in 1970. Their accounts are contradictory and in the case of cult members trying to impress parole boards with the level of their penitence, utterly unreliable.

Ironically, Manson was not present at Tate crime scene, much of the murderous work was carried out by two of the memoirists, Susan Atkins and Charles ‘Tex’ Watson. In addition to the five so-called ‘Tate’ murders, the Manson gang went on to kill a Los Angeles couple, Leno and Rosemary La Bianca and were also found guilty of two more killings, a body count of nine over a period of three weeks.

And it didn’t all end in 1970 when many of the members of the cult were jailed for life, or handed hefty prison terms. Another member of the group, Lynette Fromme, nicknamed ‘Squeaky’, who avoided jail in 1970, made a name for herself in 1975 when she attempted to assassinate President Gerald Ford with a .45 semi-automatic pistol. Twelve years later she broke out of prison and, apparently, went in search of Manson who, she had heard, had been diagnosed with testicular cancer. She was recaptured within two days and was released in 2009 after thirty-four years in jail. Manson died in prison in 2017 after being incarcerated for forty-eight years.

But amid the horror of their crimes one, often overlooked, episode in the preamble to the murders was the relationship between the so-called Manson ‘family’ and the mercurial Dennis Wilson, drummer, and co-founder of the Beach Boys. Wilson had picked up two female members of the family hitchhiking, brought them to his home, and left for a recording session. When he returned it was to find Manson, and a number of his followers, ensconced in his house. Instead of calling the police Wilson befriended Manson, who saw himself as a budding rock star. Wilson was sufficiently impressed with Manson’s songwriting abilities to record him in his brother Brian’s studio. Wilson even persuaded the Beach Boys to cover one of Manson’s songs—originally entitled ‘Cease to Exist’ – this was changed to the more innocuous ‘Never Learn Not to Love’—as a B-side. When Manson was not credited on the record the relationship turned sour. Manson is said to have threatened to kill Denis Wilson and was beaten up by Wilson as a result.

But to allege that Wilson might have been a specific target for the murderous activities of the Manson gang is something of a stretch. It presupposes a level of organisation, and homicidal mentoring on the part of Manson himself, that doesn’t appear to exist outside of the myth-making of Vincent Bugliosi’s best-selling Helter Skelter. While Manson, and many of his acolytes, were undoubtedly evil, they were not evil geniuses. Neither did they necessarily kill at the behest of Manson himself. Their atrocities, far from being commanded by a charismatic guru figure, may have been ‘copy-cat’ murders designed to convince LA Police that they had arrested another ‘family’ member, Robert Beausoleil, in error, for the killing of a drug dealer.

Wilson certainly forked out a lot of money to the Manson ‘family’—much of to treat the STDs of the famously promiscuous cult members—he even walked out of his own house and left Manson in situ when their relationship turned nasty. But there is no evidence that Manson had any plans to do away with Beach Boy drummer Dennis Wilson. That’s fake history.