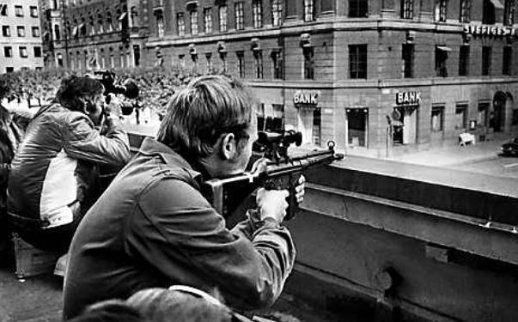 It’s an odd coincidence. On 23 August 2006 an eighteen-year-old Austrian woman, Natascha Kampusch, freed herself from eight years of often brutal captivity.  On the same date, in Sweden in 1973 a convict on parole, Jan Erik Olsson, made a botched attempt to rob one of the biggest banks in Stockholm.

How are these events connected? By something called ‘Stockholm syndrome’.

Olsson’s failed bank robbery of the Kreditbanken on Norrmalmstorg Square led to a six-day stand-off during which he held four employees (three women and a man), hostage. One of his first demands to besieging police was for the release from prison of his friend Clark Olofsson, who was brought to the bank and became Olsson’s accomplice. Hostage negotiation was in its infancy in the 1970s and the Swedish police often behaved in a fashion that would hardly be in keeping with best practice today. For example, Olsson was allowed to phone the Swedish Prime Minister Olof Palme, threaten to kill the hostages, and even grabbed one of the three women in a headlock causing her to scream as the Prime Minister listened on.

The following day one of the hostages called up Palme and demanded that he allow them and their two abductors to go free. The four hostages, constantly threatened with being killed, were subjected to mental and physical ill-treatment. Arguably the worst torture was the fact the Olsson walked around the bank vault in which they were all imprisoned, singing the same song, Roberta Flack’s Killing me Softly, an ominous choice of tune. On 28 August, after six days, the authorities got fed up and used tear gas to end the crisis.

So far, so relatively mundane. A bank robbery goes wrong, unfortunate bank officials are taken hostage, after a few initial missteps the police effect a rescue without loss of life. But it was the aftermath that was the astonishing part.

When Olsson and Olofsson were put on trial their four hostages didn’t exactly help the prosecution case by refusing to testify against their captors. Not only that, they actually began to raise money to assist the defence cases of Olsson and Olofsson. Despite their lack of co-operation, Olsson was jailed for ten years while Olofsson was released after an appeal.

A distinguished Swedish criminologist and psychiatrist, Nils Bejerot, gave a name to this unexpected development. He dubbed the empathy that had built up among the kidnapped for their kidnappers as ‘Norrmalmstorg syndrome’. The description stuck in Sweden itself, but not outside Scandinavia. Instead, internationally, the phenomenon has become known as ‘Stockholm syndrome.’

Fast forward to Vienna in March 1998. A ten-year-old girl, Natascha Kampusch goes missing. After a while, the search for Natascha ends, memories of her kidnapping begin to fade. It is generally assumed that she has been murdered. Her memory is kept alive only by her family, friends and neighbours. But she is still alive, imprisoned in the basement of a house, located about half an hour from Vienna, by her abductor, Wolfgang Priklopil. There she is held for eight years, subjected to regular abuse, as well as acts of kindness and contrition, until she manages to escape. Knowing that he is about to be arrested her abductor kills himself.

After such a traumatic experience you might think that Natascha Kampusch would want nothing further to do with the house in which she had been imprisoned for much of her childhood and adolescence. However, she is now the owner of the house, albeit the tiny basement in which she was incarcerated has been filled in.

Not that purchasing Priklopil’s house makes Kampusch a Patty Hearst, who famously, became an integral part of the illegal activities of the Symbionese Liberation Army in 1974 after they had kidnapped her to extract a ransom from her wealthy family. Her defence lawyer, F. Lee Bailey, who later defended O.J.Simpson, was not allowed to use Stockholm syndrome as a defence in court.

But ‘Stockholm syndrome’ is a one-way street. It denotes a degree of sympathy or empathy of the kidnapped for their kidnappers. Its reverse is often called ‘Lima syndrome’, a phrase coined by a Peruvian psychiatrist Mariano Querol who was himself abducted for more than a fortnight. It is also applied to the 1996 mass hostage-taking at the Japanese Embassy in Lima. There many of the dozens of those taken were quickly released and the abductors appointed to kill the remaining hostages were unable to do so.

So, the phenomenon first identified in Sweden in 1973 and dubbed ‘Stockholm syndrome’ does not denote a mutual affection between hostages and abductors.  It’s meant to denote a largely one-sided relationship only.