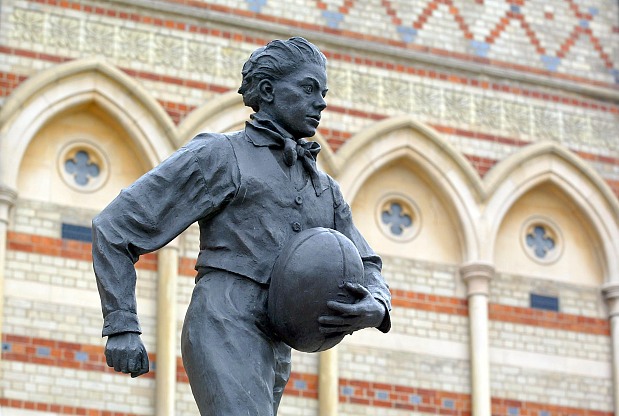 It’s unlikely the pioneers of the game of rugby in the mid 19thcentury would ever have envisaged such a thing as a ‘World Cup of Rugby’. Still less that it should be taking place in Japan, a place still shrouded in mystery when the game got off the ground.

But, how, precisely, did that happen. The ‘origin myth’ of rugby football is that a young Warwickshire boy who was attending the famous British public school of Rugby picked up the ball and ran with it during a school match in 1823 and, thus, originated the game which is now called after the school. If the story is not true then there should probably be some questions asked on 2 November when the Rugby World Cup trophy is presented, because it’s called after him!

William Webb Ellis, born in 1806, was indeed a seventeen-year-old student at Rugby College in 1823. He had the misfortune to miss the great headmaster of the college, Thomas Arnold, by a few years. He was also well removed from Rugby in the 1830s during the fictional era of Tom Brown’s Schooldays and thus missed the pleasure of being bullied by Flashman. While at Rugby Ellis was known as an excellent cricketer—he would later play for Oxford.  A plaque erected in his name in Rugby school reads as follows.

‘This stone commemorates the exploit of William Webb Ellis, who with a fine        disregard for the rules of football as played in his time first took the ball in his arms and ran with it thus originating the distinctive feature of the rugby game. A.D. 1823.’ 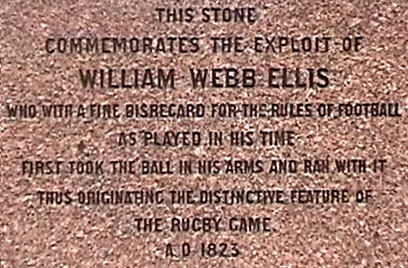 Or so the legend goes anyway!

The problem is finding any supporting evidence for the claim. Nobody ever mentioned it during the lifetime of Webb Ellis, and he himself never shouted about it from the rooftops. Although, as he went on to become a respected clergyman of the Church of England, that might not be altogether surprising.  A former curator of the World Rugby Museum at Twickenham is even on record as asserting that ‘Webb Ellis is like the King Arthur of rugby. He is very important but as soon as you start to analyse the facts behind it, there is really very little or no evidence to support the story.’

The only source for the Webb Ellis narrative is straight out of the school of  ‘dúirt bean liom go ndúirt bean lei’. A local Warwickshire man, and past pupil of Rugby, one Matthew Bloxam, wrote to the College magazine in 1876 and recounted the story of how Webb Ellis’s infraction—he did cheat after all—had blossomed into a new sport with its own set of rules first laid down in Rugby school. While there is no doubt about the latter element of the story, Bloxam himself had not actually seen Webb’s legendary run. Someone had told him about it, possibly his brother John who was a contemporary of Ellis! The other problem is that he claimed the event had taken place in 1824, at which point Ellis was at Oxford. Four years later Bloxam revised this to 1823.

An investigation into the claim by the Old Rugbean Society in 1895 led to the questioning of a number of Old Rugbeians, including Thomas Hughes, the author of Tom Brown’s Schooldays. He told the inquisitors that in his time at the college in the 1830s ‘a jury of Rugby boys of that day would almost certainly have found a verdict of ‘justifiable homicide’ if a boy had been killed in running with the ball.’

A more likely candidate, according to Hughes, was a boy called Jem Mackie. Mackie had popularised try scoring at the college in the late 1830s and his innovation had been formalised in an 1841 rule book. Problem was Mackie had been expelled from the school for being a bad boy. Is that why Ellis, by then a respectable clergyman, got the nod when the foundation myth was being created? Perhaps, on the 2 November, the newly crowned World Cup champions should be presented with the Jem Mackie Trophy?

Ironically Rugby school has firm credentials when it comes to the origins of another muscular pastime. One of the founders of the game of Australian Rules football, Thomas Wentworth Wills, was a student at Rugby from the age of fourteen.

But did eminent past pupil William Webb Ellis make the crucial, and illegal, run that spawned the game of rugby, possibly not, and definitely susceptible to the Scottish verdict, of ‘not proven’. 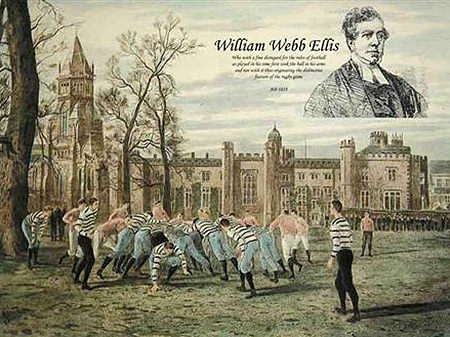