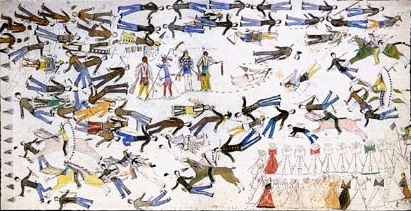 The Little Bighorn, which sounds like a bit of a contradiction in terms, is a river in the American state of Montana. It flows through mainly flat or gently undulating plains. As a river it is unremarkable. But it is not famous for the qualities of its drainage. It is infamous for what happened there on 25 & 26 June 1876 when a flamboyant, egotistical Cavalry officer, George Armstrong Custer, led his Seventh Cavalry to the worst, and last, military defeat ever inflicted on the US Army by the Plains Indian tribes, the Lakota and Cheyenne, at what they called The Battle of the Greasy Grass. No prizes for guessing what it was that greased the grass of the river’s banks.

Five of the twelve companies of the 7th cavalry were wiped out on 25 June, including ‘I’ Company, led by Carlow-born Captain Myles Keogh, the most senior of thirty-two Irish-born fatalities in the battle.

Keogh, from Leighlinbridge, had found his way to his date with destiny by a circuitous route. He had, in 1860, as a twenty year old from a relatively prosperous Catholic family, volunteered for service in the army of the Pope. He wasn’t dressed in a striped uniform guarding the Vatican city, he was fighting, unsuccessfully, to save the Pope’s last remaining landed possessions in Italy. When the American Civil War broke out the Roman Catholic Archbishop of New York, John Hughes, recruited Keogh and a number of his colleagues, to join the Union Army. He served with distinction through most of the American Civil War as a cavalry officer, fighting at Fredericksburg and Gettysburg and rising to the rank of Lieutenant Colonel.

After the Civil War the American Army was greatly reduced in size but Keogh wanted to stay on. Like most other officers he lost his exalted war-time rank but was not demobilized. He was sent west to join Custer’s 7th Cavalry charged with keeping the peace on the great American Plains and ensuring that nations like the Lakota – better known as the Sioux – the Cheyenne, and the Blackfeet, behaved themselves and remained on the relatively useless patches of land that had been set aside for them as ‘reservations’.

Keogh was undoubtedly handsome, dynamic, vigorous and physically courageous. However, he was also described by some colleagues as intemperate, drunken and violent. Although he respected the Native Americans of the Plains as military opponents he had no time for their culture or way of life. He viewed them, quite simply, as savages who needed to be kept permanently in check.

He was part of an Army that had a huge Irish element. 10,000 soldiers were stationed in the American West, a quarter of whom were born in Ireland. The Irish influence can clearly be seen in Custer’s 7th Cavalry. The muster roll in 1876 included 126 Irish-born soldiers out of 822 members of the regiment. Keogh was the only officer. The regiments two marching tunes were the Irish airs ‘Garryowen’ and ‘The Girl I Left Behind Me’.

The story of Custer’s massive miscalculation in sending his six hundred strong force against an Indian village that contained up to 5,000 fighting men, has become the stuff of legend. He made things even worse for himself by dividing his command. Everyone who fought with Custer, died with Custer. The only survivor was Keogh’s horse Comanche. Keogh himself was killed a few hundred yards away from Last Stand Hill where his Colonel died. Although he is buried in New York state a gravestone bearing his name marks the spot where he perished, surrounded by the other members of Company ‘I’. For some reason Keogh’s body was one of the few not to have been mutilated by the victorious Sioux and Cheyenne. He wore a Papal medal, awarded in 1860 by a grateful Pope. This token may have been what saved his corpse from evisceration. The Lakota and Cheyenne, who wore pendants of all kinds to ward off evil spirits, may have been wary of the Pontiff’s decoration.

Captain Myles Walter Keogh, commanding officer of Company ‘I’ of the Seventh Cavalry was one of two hundred and sixty eight US cavalrymen to die at the Battle of the Greasy Grass or the Little Bighorn, he was born one hundred and seventy-six ago, on this day.