Back in 2001, on the 75th anniversary of the establishment of 2RN, forerunner of Radio Eireann and RTE Radio, this station conducted two separate polls to make some fist at finding the 75 most beloved Irish songs. One was a poll of music professionals conducted through IMRO, the Irish Music Rights Organisation, the other was a reader/listener poll conducted through the RTE Guide. The results were varied but there was absolute unanimity about the number one song.

Written by Shane McGowan and Jem Finer of the Pogues and sung by McGowan and the extraordinary Kirsty MacColl, ‘Fairytale of New York’ has become a Christmas anti-classic all over the world. In the UK it is the most-played Christmas song of the 21st century.  It’s also, arguably, the greatest song not to have reached Number One in the British pop charts.

The song had its origins two years before its release. As with most of the mythology surrounding the ‘Fairytale’, there is disagreement about how it began. One version suggests that Elvis Costello jokingly challenged the Pogues, the least sentimental group of all time – outside of the Clash – to write a Christmas hit. Another story has Pogues manager Frank Murray coming up with the idea. Either way the work was started by the group’s banjo player Jem Finer in 1985 and finally completed by Finer and McGowan two year’s later. Sleighbells, powdery snow, peace on earth and ‘ho ho ho’ would make way for the more realistic Christmas fare of alcohol induced recrimination and blazing family rows.

A couple of things are fairly certain. At the time the song was being recorded Jem Finer was reading J.P.Donleavy’s novel A Fairy Tale of New York and thus the great Irish-American author unwittingly lent his title to an even more celebrated work. In addition McGowan was probably destined to write a great Yuletide song as he was born on Christmas day in 1957. Though when he began to make his contribution to the song he’d never actually been to New York. But he had watched Sergio Leone’s film Once Upon a Time in America repeatedly – and that seems to have done the trick.

The song, of course, is an antagonistic dialogue between a New York couple fallen on hard times, and the first female vocal – with rather different lyrics – was laid down by the Pogue’s bass player Cait O’Riordan. But when the time came to finish the recording O’Riordan had left the band. Some thought was given to approaching Chrissy Hynde of the Pretenders or Suzy Quatro to do the needful. Instead Pogues producer Steve Lillywhite – a frequent U2 collaborator – asked his then wife Kirsty MacColl to lay down a new guide track. Whether it was actually Lillywhite’s intention or not that MacColl should get the gig  – and let’s assume that it was for the sake of credibility and posterity – the Pogues decided to leave the female vocal stand. McGowan then re-recorded the male part. The two only got together to make the memorable video whose opening shot features Matt Dillon as one of ‘New York’s finest’ escorting McGowan, none too gently, to the drunk tank.

In the song the drunken, down and out couple share their recriminations on Christmas Eve – ‘I could have been someone’ he sneers, clearly blaming anyone but himself for a life of failure. ‘Well so could anyone’ she retorts in one of the great musical putdowns. It’s all relentlessly embittered, though the ending offers some hope but its  rather more believable than ‘So here it is merry Christmas everybody’s having fun / look to the future now we’ve only just begun’.

Of course in a world where genius frequently plays second fiddle to utter mediocrity the song failed to become the UK Christmas number one. It was kept off the top of the charts by the Pet Shop Boys’ cover version of a mawkish 1973 Elvis torch-song ‘Always on my mind’.  It did make Number 1 in Ireland, however, which greatly pleased Shane McGowan. ‘I wouldn’t have expected the English to have great taste’ he told the Guardian on the song’s 25th anniversary re-release.

‘Fairytale of New York’ – far more Christmassy than ‘chestnuts roasting on an open fire’ –  reached its highest position in the UK charts twenty-nine years ago, on this day. 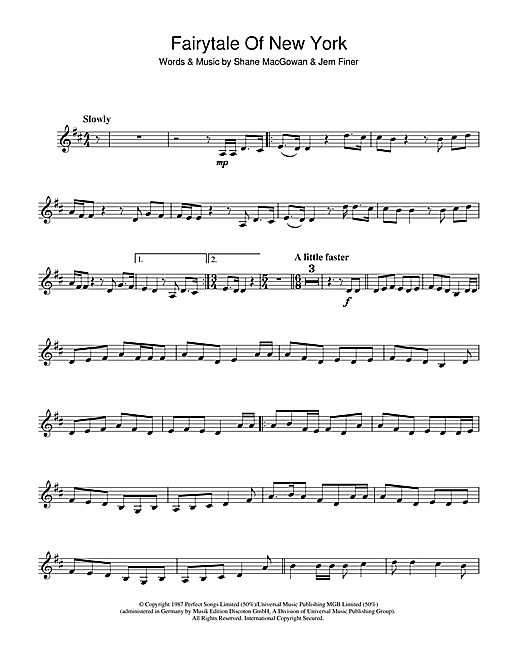