Today is the one hundred and fifty-fourth anniversary of the death of John Wilkes Booth. You may have heard of him, in the way that you might also be aware of Lee Harvey Oswald and have no clue whatever who Leon Czolgosz and Charles Guiteau were.

The problem is that if you want to be remembered as an assassin you have to kill someone whose fame will endure!

Booth, was the actor who, infamously, murdered President Abraham Lincoln on Good Friday, 14 April 1865, in Ford’s Theatre in Washington, D.C.. Lee Harvey Oswald may have been the assassin who killed John F. Kennedy in Dallas in 1963, or a patsy framed for the murder to protect those responsible. As he himself was shot dead we aren’t in a position to ask him which is the truth.

The reason why you’ve never heard of Czolgosz and Guiteau is that they killed American Presidents few people, including most Americans, can probably even name. Although the claims of Czolgosz to immortality are undoubtedly hampered by the fact that no one, other than fluent Polish speakers, can pronounce his name properly. For the record, Guiteau assassinated President James A Garfield in 1881 and Czolgosz accounted for President William McKinley in 1901.

Czolgosz and Guiteau were lone killers. Czolgosz was an anarchist who didn’t like politicians, while Guiteau wanted a government job and didn’t get it. Lee Harvey Oswald was either a lone killer, completely innocent or at the heart of a conspiracy. And I have no intention of delving any further into that one. That way lies madness. Though I would recommend reading the account of Anthony Summers if you’re interested in that sort of thing.

Let’s get back to John Wilkes Booth. He was a member of a prominent theatrical family from Maryland. Which made him, technically a southerner, but only just. Maryland was actually a slave state that remained loyal to the Union in the American Civil War. Booth was an enthusiastic supporter of the Confederate cause. Before the war began he had, with immense satisfaction, attended the hanging of the great abolitionist John Brown, after his capture at Harper’s Ferry.

He did not stick around to see Brown’s body ‘a-mouldering in the grave’, in the words of the famous song. This was because he had an acting career to pursue. His love of the Confederacy did not, apparently, extend as far as joining up to fight for the cause. Throughout the Civil War, he continued to perform onstage, mainly in Shakespearean roles. Most of his performances took place in states loyal to the Union. In 1863 he was arrested in St. Louis after being overheard proclaiming that ‘he wished the President and the whole damn government would go to hell’. The great Confederate supporter then signed a pledge of loyalty to the Union, in order to be allowed to pursue his acting career.

In 1864, with the Confederate cause faltering, Booth became involved in a plot to kidnap President Lincoln. Among his associates was one Michael O’Laughlen, a childhood friend from Baltimore. The plot came to nothing but was revived after the surrender of General Robert E. Lee’s army in April 1865. This time, however, the object was an assassination. When Booth heard that Lincoln was to attend a performance in Ford’s theatre, to which he had ready access, he arranged an escape route and secured a .41 calibre Deringer pistol. That night, at around 10.00 pm, he stole into the President’s box and shot Lincoln in the back of the head. He then jumped from the box onto the stage, apparently shouted the Latin phrase ‘Sic Semper Tyrannis’ (‘Thus always to tyrants’) and fled. His escape was assisted by other members of the conspiracy, but he got no further than eastern Virginia before being tracked down. The barn in which he was holed up was surrounded by Union troops and when Booth refused to surrender it was set alight. When Booth emerged he was shot by a Union soldier. Upon searching his body a diary was found. The entry for the day of Lincoln’s assassination read, ‘Our country owed all her troubles to him, and God simply made me the instrument of his punishment.’

Subsequently, eight others were tried for their part in the conspiracy by a Military Tribunal, these included Michael O’Laughlen. Four were hanged, O’Laughlen was sentenced to life imprisonment.

Which contradicts the assumption that Booth, like other American Presidential assassins, was a lone killer. That’s fake history. 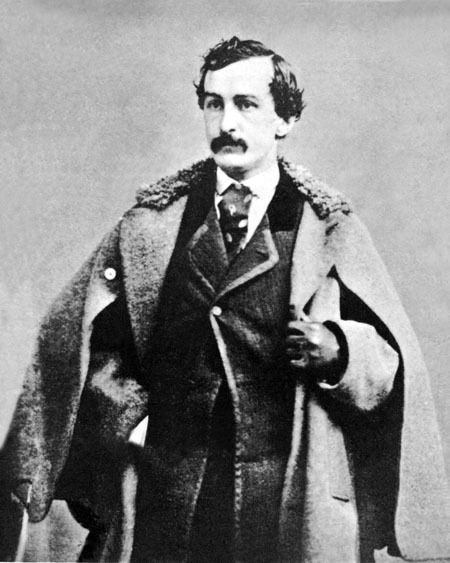