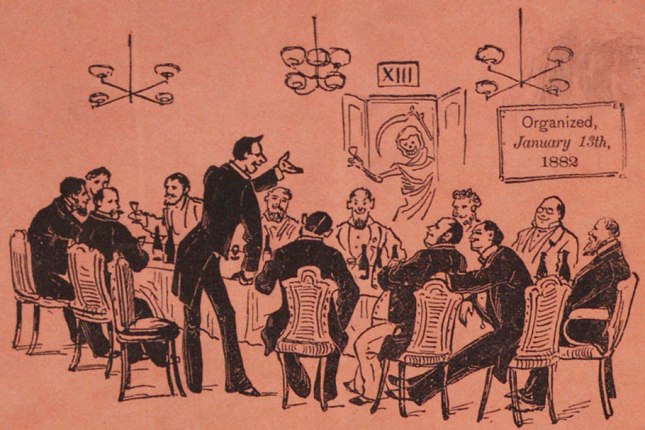 Despite its exalted position as a prime number, indivisible by any number other than itself, thirteen suffers from a very bad press and must get really depressed when it looks back at twelve. Because twelve has it all. Historically it denotes completeness. How many listeners ever did thirteen times tables? No one! You always stopped at twelve by twelve equals one hundred and forty-four. There are twelve months in the year. Twelve hours on the clock. Twelve tribes of Israel. Twelve astrological signs of the zodiac. Twelve apostles of Jesus Christ. Thirteen just never gets a luck in.

Except when it comes to the bad stuff!

Thirteen is so unpopular that many American cities do not have a Thirteenth Street or a Thirteenth Avenue. How many high-rise buildings have you been in without a  thirteenth floor? Hospitals, where ill-luck is a really bad idea, often avoid labelling rooms with the number. You may also have flown through an airport with no Gate thirteen. Even the so-called  ‘bakers dozen’, thirteen loaves, came about only because of the risk that the sale of twelve underweight loaves to a customer might lead to the loss of a baker’s ear or a hand as a punishment ‑ they did that kind of thing back in the mists of time. So a medieval Pat the Baker would toss in a thirteenth, just to be sure of keeping all his appendages.

Now put thirteen together with a Friday, and you have Bonny and Clyde, Torquemada and the Inquisition, and Bros. Lethal combinations all.

Do you by any chance suffer from friggatriskaidekaphobia? You might think not, but if I tell you that Frigga was the Norse goddess of Friday, and that triskaidekaphobia denotes a fear of the number thirteen, perhaps you might be willing to acknowledge that you share, apparently, with twenty million fearful Americans, an aversion to Friday the thirteenth.

Christianity seems to be very much at fault here. Friday is considered to be unlucky because Christ was crucified on that day. Thirteen is ill-starred because that was the number for dinner when Christ sat down with his twelve apostles for the Last Supper. But if that is the case why does the ancient Babylonian code of Hammurabi, dating from 1772 BC not have any law number thirteen? Is it possible that thirteen was already problematic long before Jesus broke bread with his dozen closest disciples?

To demonstrate their utter fearlessness a number of prominent Americans got together in the 1880s and formed The Thirteen Club, promising to root out superstition while tempting fate by sitting down thirteen to a table for their annual dinners. They even walked under ladders to prove how silly that old chestnut was. Members included five US Presidents, among them William McKinley. You might have heard of William McKinley, he was assassinated! However, in the interests of full disclosure it should be pointed out that Theodore Roosevelt was also a member of The Thirteen Club. As he became President when McKinley was shot, it would appear that sitting down thirteen to a table didn’t do him any harm.

Just as well for retailers that the spurious American import, Black Friday, falls at the end of the month of November because according to something called the North Carolina Stress Management Centre and Phobia Institute more than $800m is lost each year due to shoppers staying home on Friday the thirteenth.

In 1993 the august British Medical Journal decided to test the superstition in a research piece entitled ‘Is Friday the thirteenth bad for your health’. They looked at a range of traffic accident statistics over a period of years on two different dates, Friday the sixth and Friday the thirteenth. While they found that more drivers stayed at home on the latter date, they discovered that the former was a safer day on which to travel. Their conclusion was that ‘Friday the thirteenth is unlucky for some. The risk of hospital admission as a result of a transport accident may be increased by as much as fifty-two percent. Staying at home is recommended.’

Oh, and by the way, it appears that if you break a mirror that old ‘seven years of bad luck’ thing is only applicable if you do so on Friday the thirteenth. If you want to experiment you still have a few hours left, but maybe don’t check the makeup until after midnight, just in case.

So, is there anything to fear from Friday the thirteenth? Not at all, relax. What can possibly go wrong just because the thirteenth day of the month falls on a Friday? Is it ok if I uncross my fingers now?