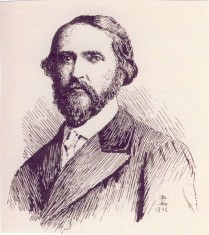 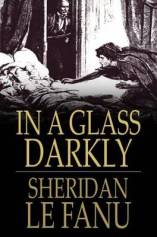 Sheridan Le Fanu, born in Dublin in 1814 was of Huguenot descent. He was the son of a frequently impoverished clergyman and the grand-nephew of the great Irish playwright Richard Brinsley Sheridan, from whom he derived his Christian name. His father had the misfortune to be a Church of Ireland clergyman during the Tithe War, a time when they were about as welcome in most Irish rural communities as President Barack Obama at a Ku Klux Klan rally.

Le Fanu junior went to Trinity College where he became auditor of the Historical Society, the famous TCD debating forum. He began contributing stories to the Dublin University Magazine in 1838 and in 1840 became, for a short period, part owner of the Unionist newspaper the Dublin Evening Mail, which, many years after his tenure, would compare the Irish Land League to the Colorado Beetle, to the detriment of the insect.

Le Fanu’s own political instincts were not quite as Tory as his shareholdng in the Mail would suggest.   During the Famine he allied himself to the likes of John Mitchel, Thomas Francis Meagher, Samuel Ferguson and Isaac Butt in condemning British policy in Ireland during the Famine years.

Le Fanu would become the leading writer of Gothic fiction in early Victorian Britain, the precursor of authors like fellow Dubliner Bram Stoker. His ghostly creations may well have emerged from the horrors of the Great Famine and/or from tragedies closer to home. His wife Susanna suffered from mental illness and died in April 1858 after what was described as an ‘hysterical attack’. After her death Le Fanu became almost a recluse.

Le Fanu’s first great Gothic novel, The House by the Churchyard, published in 1863, is set in the Phoenix Park and Chapelizod and was used by James Joyce as a source for Finnegan’s Wake. Thereafter, however, for commercial reasons, his work was mostly set in England. In 1864 he had huge success with Uncle Silas a mystery novel that influenced writers like Arthur Conan Doyle and Wilkie Collins. Two film versions have been made of the novel. His other outstanding success was Carmilla, a vampire novella, set in Eastern Europe with a lesbian subtext that has inspired several films and certainly heped Stoker to write Dracula.

Le Fanu’s plots include the aforementioned vampire, a man returning from the grave to claim his bride, a Faustian pact, Gothic castles, supernatural visitors and sundry other joyous subject matter. Like many other Irish writers he also pillaged the Irish folk tradition with gusto and to excellent effect. In this context it is odd that his first published story ‘The Ghost and the Bonesetter’ is a comic narrative. He didn’t persist with the genre.

Many of his short stories, which tend to be more Irish than his longer fiction, purport to be from the memoirs of an 18th century Irish priest Father Purcell. These were published in the Dublin University Magazine and often later mined by the author himself for the storylines of his novels.

Le Fanu might have produced even greater work and been remembered in the manner of Stoker, Edgar Allen Poe and Mary Shelley, but his life was relatively short. He died in 1873 at the age of 59.

Sheridan Le Fanu, ghostwriter in the traditional sense of the word, was born 201 years ago, on this day.