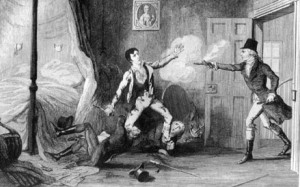 Francis Magan was something of a trailblazer in his early twenties and a traitor before he reached his thirties.

Magan came from a well-to-do Westmeath Roman Catholic family. His father was a woolen draper with a premises in High Street in Dublin. Magan attended Trinity College. In 1793 he was one of the first Catholics admitted to the Bar. This happened by virtue of an important Catholic Relief Act passed that year.  Sadly he was not a very good barrister and was soon in financial difficulties as he tried to maintain an establishment in Usher’s Island in Dublin, close to the Four Courts.

He was, however, a far better spy. As a young man he joined the Society of United Irishmen and was privy to the work of that organisation’s inner councils. He was recruited, in 1797, as an informer by the infamous Francis Higgins, the so-called ‘sham Squire’ and proprietor of the Freeman’s Journal, a newspaper solidly supportive of government policy. Magan was one of a number of spies being run by Higgins, who answered directly to his own spymaster, the under secretary based in Dublin Castle, Edward Cooke.

Magan insinuated himself into the United Irishmen to the point where he became friendly with the acknowledged leader of the Dublin section, the charismatic Lord Edward Fitzgerald. He unsuccessfully attempted to betray Fitzgerald to the authorities on 17 May 1798 but the city’s leading policeman, Major Sirr, failed to arrest the United Irishmen leader as he left Magan’s house. Magan was more successful two days later. Information he supplied led to the apprehension of Fitzgerald, who died of the wounds incurred resisting arrest. The death of Fitzgerald was a huge blow to the revolutionary prospects of the United Irishmen in Dublin.

Magan, like that other notorious informer, fellow barrister Leonard McNally, always managed to remain above suspicion. Indeed, on the night of Fitzgerald’s arrest, he was elected a member of the executive committee of the United Irishmen in Dublin. He continued to pose as a committed Catholic nationalist after the suppression of the 1798 rebellion. He spoke against the Union in the Dublin bar and became active in the early struggle for Catholic emancipation. In all of this he had his own agenda.

Magan was well paid for his efforts. He received £1000 for betraying Fitzgerald,  and £500 for spying on William Todd Jones, a northern Protestant advocate of Catholic Emancipation. He also enjoyed a secret pension of £200 a year from a grateful administration in Dublin Castle in the latter years of his life. He remained a respectable member of the community until his death, becoming, for example, a life member of the Royal Dublin Society. Magan died in 1843 leaving his fortune to his nearest relative, a sister. When she, in turn passed away, she left £14,000 in her will, much of which would have come to her from her brother.

Magan was not finally ‘outed’ as a spy and informer until the publication in 1892 of W.J.Fitzpatrick’s book The Secret Service under Pitt.

Francis Magan, unsuccessful barrister and accomplished informer, was born 241 years ago, on this day.