The United Irishmen’s rebellion of 1798 was over—except that it wasn’t. Not quite. There would be a sting in the tail for the British authorities, who had already savagely put down the main uprisings in Antrim and Wexford, and minor eruptions elsewhere. They had been royally assisted by spies and informers, like Francis Magan and Francis Higgins, in anticipating the rebellion in Dublin. Their luck had held out in the winter of 1796 when a French fleet had been unable to land, due to adverse weather conditions at Bantry Bay.

But there was a fairer wind off the coast of Mayo on 22 August 1798 when, two months after the United Irishmen had otherwise been defeated, shot, piked, hanged, drawn and quartered, the French arrived in the form of a force of around 1000 men, led by General Jean Joseph Humbert. A little bit trop tard but better than jamais. The great Irish-American writer Thomas Flanagan called it The Year of the French in his epic novel. In reality it was much closer to ‘The Fortnight of the French’, a designation that lacks a bit of punch and drama. The intervention, initially successful, was all over by 8 September.

The French invasion force—dispatched on the basis of that age-old axiom that ‘the enemy of my enemy is my friend’—begat the short-lived Republic of Connacht, under the Presidency of the Mayo landowner John Moore. But it also spawned a fascinating captivity memoir, written by the incumbent Church of Ireland Bishop of Killala, Joseph Stock.

Stock, a fluent French speaker, was born in Dublin in 1740. The son of a wealthy merchant he was educated at Trinity College. He became a clergyman, and was briefly headmaster of Portora Royal School in Enniskillen, before becoming a bishop in January 1798. In 1776 he had published a biography of the great Irish cleric and philosopher, Bishop George Berkeley, a few years after his death.

Stock had the misfortune to be in the wrong place at the wrong time, when the French force arrived. He was captured, along with the British defenders of Killala. That evening he met Humbert. The encounter was extremely revealing. It was clear that Humbert had been led to believe that there would be considerable Irish aristocratic support for the invasion. He actually asked an establishment figure like the Church of Ireland Bishop of Killala if, as Stock puts it, ‘he chose to embrace the fortunate opportunity at once of serving himself and liberating his country.’ Stock politely declined the offer and chose to become a prisoner.

The French experienced initial success, notably in overpowering a British force at Castlebar in a skirmish that became known as ‘The Races of Castlebar’, because of the rapidity of the British retreat. This victory prompted uprisings in Longford and Westmeath. These were quickly put down by British troops and loyal Irish militia units. But, no poetry intended, it all came unstuck at Ballinamuck. There Humbert’s force, augmented by Irish rebels, was soundly defeated. The captured French were later exchanged for British prisoners of war, but many of the Irish were immediately executed. Stock demonstrated his personal loyalties by referring in his narrative to 8 September 1798 as ‘a day memorable for the victory at Ballinamuck.’

Humbert was later repatriated in a prisoner exchange, rejoined Napoleon’s army, and even fought against the British, alongside Andrew Jackson, in the American war of 1812. A street in Ballina is called after him, on it stands a monument erected in his honour.

Stock’s narrative of the rebellion was remarkably nuanced and even-handed for someone who was a Bishop of the Established Church, and who had been a prisoner of the rebels. He emphasised that there was little retribution of any kind on the part of the Irish rebels allied to the French force. The only killings took place in pitched battles. There was some looting and arson, but Stock points out that the depredations of the British forces were far greater than those of the United Irishmen. Stock chose to publish the memoir anonymously in 1800, which was, in retrospect, a wise move. All references to himself, or ‘Monsieur l’Eveque’, as Humbert called him, are in the third person. But he was quickly identified as its author, and subsequent imprints bore his name. His relative fairness probably did him no favours when it came to his subsequent clerical career.

Bishop Joseph Stock, author of a fascinating memoir of one of the most colourful episodes of the 1798 rebellion, was born two hundred and seventy-seven years ago, on this day. 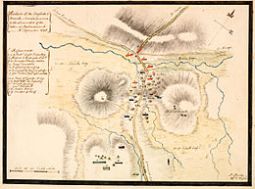