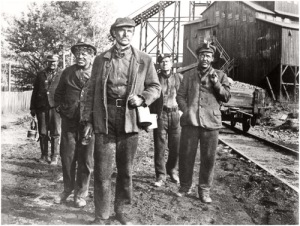 Their Irish origins are mysterious, though they were almost definitely a 19th century agrarian secret society. Their name may have emanated from a tradition that was not just Irish – the Welsh were party to it as well in the so-called Rebecca riots  – where male activists disguised themselves as women before engaging in illegal activity up to and including murder. They may have also have been associated with the main Roman Catholic rival to the Orange Order, the Ancient Order of Hibernians.

But it wasn’t in Ireland that the Molly Maguires made a name for themselves.It was in the anthracite mines and on the rail-roads of Pennsylvania. Here, the tactics used against landlords and land agents in Ireland, were applied in bitter labour disputes, with the Hibernians, an organisation that originated in the USA, acting as a legitimate front for the illegal activities of the Mollies. Then again there are historians who do not believe this shadowy conspiracy ever existed on the scale that was claimed by the owners and shareholders of the mines and railways in late 19th century Pennsylvania. That is a point of view widely held at the time as well.

Immigrant labour offered a glorious opportunity for Pennsylavania capitalists to undercut the wages being paid to American-born miners. Pay for Irish migrants was low and conditions were brutal. On the job fatalities and injuries ran into the hundreds each year. The so-called ‘panic of 1873’ – not a million miles from the stock market crash of 1929 and the sub-prime crisis of 2007 made a bad situation even worse for the mine and railroad workers.

Just as every crisis brings opportunity, mostly for the unscrupulous, the President of the Philadelphia and Reading Coal and Iron company, Franklin Gowen, son of an Irish immigrant and the richest man in the region, decided it was high time to crush the burgeoning trade union activity in the state, represented by the Workingmen’s Benevolent Association. While the ‘Molly Maguires’ may have been the convenient invention of Gowen himself there is no doubt that the perceived enemies of the Pennsylvania mineworkers were being killed by the dozen. In one of the six main anthracite mining counties there had been 50 such murders between 1863-67.

Gowen, with the co-operation of his fellow mine owners, engaged the services of the yet-to-become-famous detective agency run by Scottish immigrant Allan Pinkerton, to help break a general strike in the anthracite fields. In 1875 he despatched an agent, Armagh-born James McParland, to the area. Posing as ‘James McKenna’ the Pinkerton detective infiltrated the Benevolent Association and claimed also to have insinuated himself in to the confidence of the Molly Maguires. Information gathered by McParland was, in the first instance, passed on to vigilante elements who happened to share Gowen’s union-bashing objectives. When suspected Mollies were murdered in their own homes McParland threatened to resign from the Pinkerton organisation but was persuaded to remain in place. After six months the strike ended and most of the miners returned to work having agreed to a 20% wage cut. However, Irish-born members of the Ancient Order of Hibernians refused to concede and fought on. Attacks on overseers, strike-breakers and police continued until information supplied by McParland led to a number of arrests.

The Armagh Pinkerton, who had, by his own account, been a trusted collaborator of the leadership of the Mollies, testified against a number of those accused of murder. Demonstrating the extent of his political power within the state of Pennsylvania Gowen had himself made special prosecutor and conducted some of the cases against the Mollies. The accused included the alleged ringleader of the organisation John ‘Black Jack’ Kehoe. McParland’s testimony sent ten men to the gallows. Many of them, including Kehoe, loudly proclaimed their innocence of the crimes of which they had been convicted. In 1979 the state of Pennsylvania pardoned Kehoe posthumously after an investigation by its Board of Pardons at the behest of one of his descendants.

The Molly Maguires have passed into legend. Arthur Conan Doyle based a Sherlock Holmes mystery, The Valley of Fear on their alleged activities. The 1970 film The Molly Maguires, starred Sean Connery as Kehoe and Richard Harris as McParland.

Four members of the alleged Molly Maguires conspiracy, Alexander Campbell, John Donohue, Michael Doyle and Edward Kelly were hanged in Pennsylvania 134 years ago, on this day.