As a young boy in a rather grim Irish boarding school in the 1960s one of the few attempts by the prison authorities to break the monotony was the occasional screening of a film in the school library. These would often be of an ‘improving’ nature, designed to elevate and inform rather than to entertain. So The Song of Bernadette was rather more likely to turn up than the latest James Bond adventure.

One screening which greatly appealed to this particular teenage nerd, though it might not have been quite as well received by some of the less historically oriented students, was a stirring archive-based account of the build up to the 1916 Rising and it’s aftermath. Mise Eire was like nothing we had ever seen before. It combined the talents of two of the country’s greatest ever artists, filmmaker George Morrison and composer Sean O’Riada.

Mise Eire was commissioned in the late 1950s and premiered at the 1959 Cork Film Festival. The feature length documentary, entirely in Irish with suitably portentous narration by Padraig O’Raghallaigh, had been directed or, more accurately, assembled by the legendary Irish film maker George Morrison, then in his thirties. Morrison, who had been a Trinity College medical student before he was eaten alive by the dreaded film bug, visited archives all across Europe and collected 300,000 feet of old, silent, black and white film which he then edited painstakingly into a full length documentary. For this he was, apparently, paid £375 – unfortunately he didn’t haggle for residuals and made nothing further from his efforts. Some compensation for this was his election to Aosdána in 2005 and an Industry Lifetime Contribution Award at the IFTA’s in 2009, when he was 87 years old.

The events represented visually in Mise Eire – the first theatrically released film to be recorded in the Irish language – had already become the stuff of legend long before it was released. It included footage of the 1915 funeral of O’Donovan Rossa, including shots of the old Fenian’s open coffin and the graveside oration by Pearse. It’s probably the only existing moving documentary coverage of either man. There is also unique footage of James Larkin leading a protest march after the 1914 Bachelor’s Walk killings and of the main motive force behind the Rising, the arch plotter himself, Thomas Clarke. Members of the Irish Citizen’s Army are depicted in training. Members of the Irish Volunteers are shown on their way to take up their positions on Easter Monday in Dublin. And then, of course, there is the representation of the Rising itself. We see the impact of the conflict on the fabric of Dublin city centre and the Volunteers, post surrender, being marched off to Frongoch prison in North Wales. Later material, from the War of Independence, includes rare shots of Michael Collins – speaking at the funeral of hunger striker Thomas Ashe, and of Eamon de Valera campaigning in the decisive 1918 General Election.

But of course there is a huge irony at the heart of Mise Eire, because despite the gargantuan achievement of Morrison in collecting and collating all this invaluable material, what sticks in the mind is not so much the images as the music underneath. Because, famously, the score for the film was written by the great Sean O’Riada. Making ingenious use of familiar traditional pieces like Roisin Dubh and Boolavogue, O’Riada created a soundtrack that underlined the significance of the images seen onscreen but also stood on its own as abiding symphonic music. The soundtrack was recorded in the Phoenix Hall on 19 May 1959 with O’Riada conducting the Radio Eireann Symphony Orchestra.

Some trivia associated with the film. It includes one of the earliest photographs ever taken in Ireland, a still dating from the Famine period when photography was in its infancy. George Morrison later wanted to add an English language version of the film’s voice-over. Anglo-Irish film star Peter O’Toole was recruited for the task but, in the face of opposition from the producers Gael Linn, this version was never recorded. Today DVD’s of the film includes English language subtitles.

Mise Eire, blessed by the images collected and assembled by Morrison and the music of O’Riada, had its commercial release fifty six years ago, on this day. 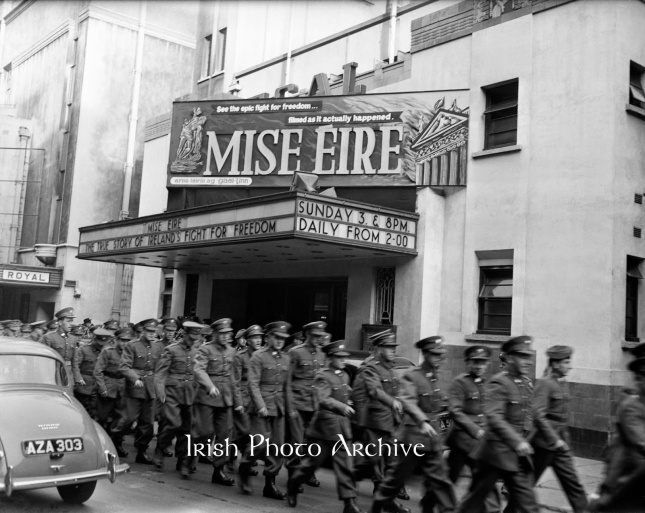