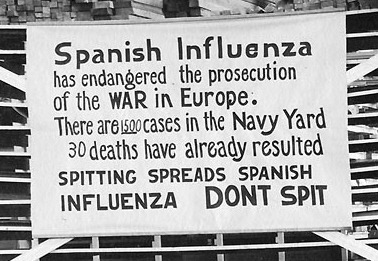 To put it in perspective. Anything up to ten times the numbers who died in World War 1 would succumb to influenza in 1918 and 1919. More people died of flu in one year than had been killed by the infamous Black Death from 1347 – 1351. And it was a highly democratic, equal opportunities, virus. It did not just plague the very old and the very young. The death rate among 15-34-year-olds worldwide, during the fleeting visit of the H1N1 virus, was ten times the normal rate. Spanish flu couldn’t be faulted for originality either – it was entirely new. Its very novelty meant that no one had time to build up immunity.

While the arrival of the armistice on 11 November 1918 was a welcome reprieve for millions of soldiers who didn’t have to risk life and limb any more, it may have had the opposite effect on the civilian population. The very celebrations that marked Armistice Day all across Europe offered a rare and wonderful opportunity for the bug to increase and multiply among the cheering crowds. Then the return from the front a century ago of millions of demobbed soldiers brought on another wave of the disease.

Average life expectancy in the USA suddenly plummeted by twelve years – more US WW1 soldiers died of influenza than died in battle. This was despite the efforts of their commander, General Pershing, to inflict as many casualties as possible on his own troops and probably kill his way to the Presidency.  There were no anti-flu vaccines back in those days. The first such vaccine wasn’t marketed until the 1940s, just in time for the sequel to the Great War – the Even Greater War of 1939-45

Aggravating the problem was the fact that the world was yet to breed or design medical practitioners who were completely immune to the diseases they were called upon to treat. The flu bug delighted in infecting doctors and nurses just as much as it did soldiers and dockers

I had a little bird

Its name was Enza

I opened the window 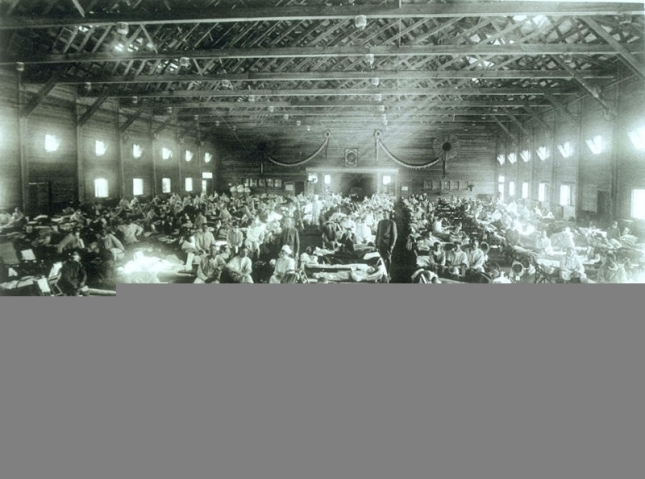 The first recorded case of Spanish flu occurred this week just over a century ago. Obviously, with a name like Spanish flu it was first documented in Madrid, or maybe Malaga, or perhaps even Barcelona–with the authorities resolutely refusing to call it Catalan flu. Actually, it was none of the above. The first case of Spanish flu was noted in Fort Riley, Kansas. That’s not Kansas in Andalucia, that’s the Kansas that Dorothy so badly wanted to get back to in The Wizard of Oz,  the one in the United States of America. So why, you might well wonder, did the Kansan doctors decide to designate this particular strain of influenza as ‘Spanish’? Was the first patient of Hispanic origin? Did the medical staff share the apparent aversion of the 45thPresident of the United States for ‘bad hombres’ who spoke the dominant language of Central and South America? Again, the answer is ‘none of the above’. They didn’t actually call it Spanish flu at all. In the beginning, nobody did.

That designation is a function of the war that was being fought over much of western Europe at the time. The military authorities in both sets of trenches—not that the actual authorities themselves spent much time in the line of fire—kept a tight rein on information coming from the front. It was distributed with all the largesse and generosity of a White House press conference today, insofar as such things still exist. Not telling the truth was deemed good for morale. This meant no one had a clue that thousands of troops, packed into trenches and susceptible to every cough and splutter, were dying of the disease.

Spain, however, was sensibly neutral and unlimited information was coming out of the Iberian peninsula. Spanish newspapers were even allowed to report the grave illness from the disease of their own King, Alfonso XIII.  This gave the impression that influenza had originated amongst the unfortunate Spaniards and, like some dedicated anti-Hispanic virus, was killing them alone. As the medical staff in Fort Riley, Kansas and thousands of other military and civilian hospitals worldwide could attest, such was not the case.

So, was the virulent Spanish flu, first detected this week in 1918, so-called because it originated in Spain? Not a bit of it. That’s fake history.