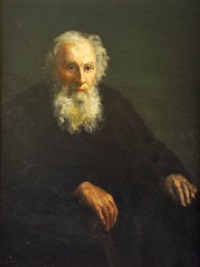 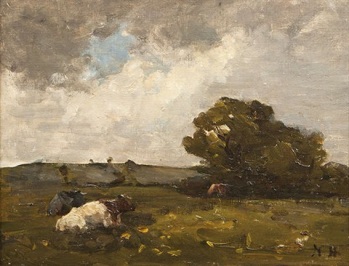 Nathaniel Hone the Younger (Yes .. I know he doesn’t look very young – and ‘Pastures at Malahide’)

To dispatch Younger as rapidly as possible, he began his career as a railway engineer but proved himself to be a true Hone when he took up painting as a profession and went to study in Paris … where else? How come nobody ever studied art in Basildon or Southend?  He also married a member of the Jameson distilling family and settled in North Dublin, making him far more of a truly Irish artist than his more celebrated and controversial ancestor of the same name.

One of Younger’s best-known pieces is ‘Pastures at Malahide’ which has lots of cows in the foreground and is otherwise composed of cute fluffy clouds. He was also related to the 20thcentury artist Evie Hone. And I hope that’s enough on Nathaniel Hone the Younger.

Now let’s get on to Nathaniel Hone the Elder, who was something of a lad and, with one painting at least, quite literally, brought bitchiness to a fine art. 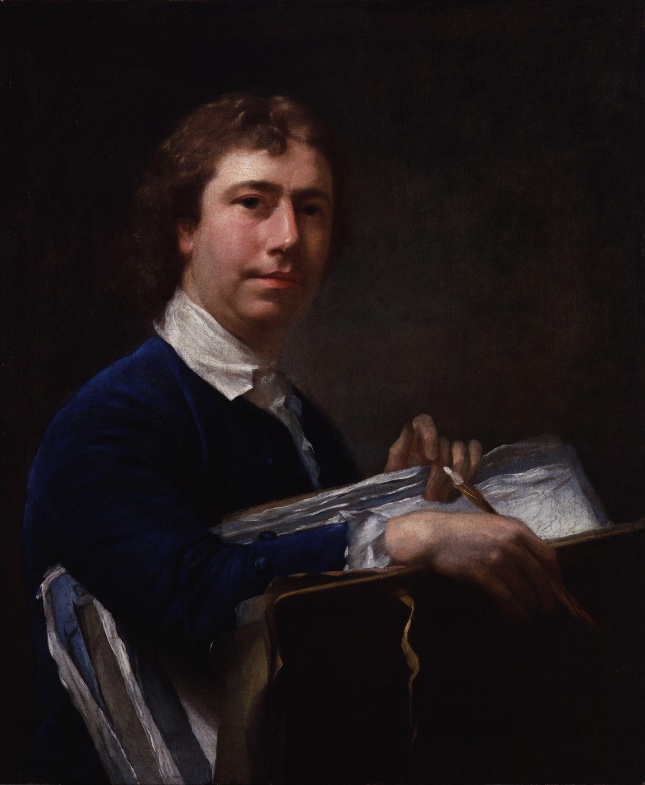 The first Natty Hone was an 18thcentury artist, son of a Dutch merchant based in Wood Quay in Dublin. At an early age he moved to London, married the daughter of the Duke of Argyll and established himself as a portrait painter before moving to Rome for further study. Once again neither Basildon nor Southend getting a look in.  One of Hone’s most famous sitters was the founder of Methodism, the great preacher John Wesley.  Hone was so highly regarded that he was one of the founder members of the Royal Academy, established in 1768. So far, so good.

But, in 1775 he painted a picture which rests not too far from here, in our own National Gallery. It’s called The Conjuror and depicts an aged Sir Joshua Reynolds in a distinctly unflattering light. Reynolds, President of the Royal Academy, was the most celebrated portrait painter of his day. Unfortunately his day was the same as Hone’s. Which meant that Hone, had he played a violin, would have been second fiddle to Reynolds. Both men were founders and members of the Royal Academy, but Reynolds got to hang out with the likes of Samuel Johnson, Edmund Burke, Oliver Goldsmith, David Garrick and Charles James Fox, in a group known collectively as ‘The Club’. Another member of his set was one of only two female members of the Royal Academy, the Anglo-Swiss artist Angelica Kauffman. That both Reynolds and Kaufmann held each other in high regard is undeniable. That they were lovers is also likely. That Hone loathed both of them can hardly be disputed either, given the subject matter of The Conjuror.

Reynolds had a habit of ‘quoting’ from the classical canon in many of his portraits, a practice that Hone could not abide.  In The Conjuror– whose full title was The Pictorial Conjuror, displaying the Whole Art of Optical Deception-an elderly bearded man, meant to represent Reynolds, sits in front of a cascade of classical portraits. A young smiling girl rests her elbows on his right leg. The young girl is intended to depict Angelica Kauffman, who was considerably younger than Reynolds. But that wasn’t the real problem, or the only representation of Kauffman in the original painting. In the top left-hand corner Hone added a group of naked artists in procession, waving paint brushes in the air. In the middle of this claque is a naked woman dressed only in black stockings. When the painting was presented to the Royal Academy for exhibition Kauffman objected, on the grounds that the scantily-clad female was clearly intended to be her. The painting was rejected by the Academy. Had Reynolds been the duelling type a challenge would almost certainly have followed. Dash it all, the honour of a woman was at stake! Hone spent a lot of time apologising and claiming that he had never intended any insult to Angelica Kaufmann. Nobody believed him, though it didn’t seem to do his career much harm.

Hone later exhibited a redacted version, with the nude figures painted out. This is the one that hangs in our National Gallery. The painters in the altogether were replaced by what looks like an image of the members of ‘The Club’ assembled around a writing table. This was displayed in a retrospective Hone exhibition, the first of its kind to be devoted to a single artist. The event’s lustre is slightly diminished, however, by the fact that it was all organised by Hone himself. He died in London in 1784 at the age of sixty-six.

Nathaniel Hone the Younger, his esteemed great-grand nephew, was born, one hundred and eighty-seven years ago, on this day. 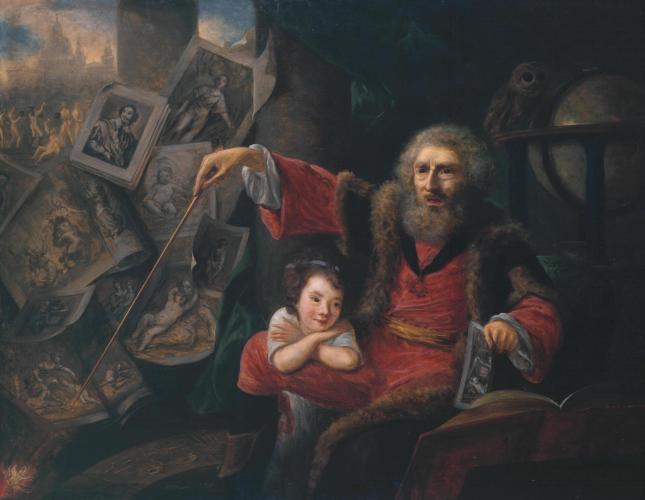 ‘The Conjuror’ by Nathaniel Hone (the Elder)  – sublime bitchiness