The allure of the charismatic orator – Myles Dungan 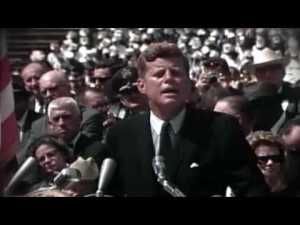 They made for a distinctly odd couple. Natives of two of the great east coast cities of the USA, both had been tempered by war and were united by their professed religious beliefs. But they had little else in common.  They were separated by a generation and by modernity itself.

John F.Kennedy, forty-six years old, at the height of his power and influence, a progressive leader of the richest and most potent nation on the planet, waved enthusiastically to the adoring crowd. Eamon de Valera the conservative eighty-year old ailing figurehead of a failed political backwater – one he largely created himself – stood, remarkably erect, nodding to the crowd, probably conscious of his subaltern status, on this day at least, in his own capital city.

This writer was a nine-year old onlooker, smitten by the gesticulating Camelot Prince, the tanned, handsome lace-curtain Irishman from Boston, while merely curious about the elderly statesman, originally from New York.  It was a powerful image. Youth and vigour juxtaposed with age and infirmity.  The future standing alongside the past. Of course, like many images, it was an illusion, as beguiling as Camelot itself.

It is no coincidence that the TV series Mad Men is set in the 1960s. It was the dawning of the age of the brand. And John Fitzgerald Kennedy was an ad man’s dream. He was a smart, personable, articulate war hero and he ‘looked Presidential’.  Before Madison Avenue got hold of presidential elections it didn’t much matter how you looked. You could even be confined to a wheelchair.

He was already a ‘brand’ long before he arrived in Ireland in June 1963, perhaps even before he took over the White House in January 1961. With iconographers like Theodore Sorenson and Pierre Salinger cultivating and honing the Kennedy narrative he could hardly fail. Fifty years later he is a mythic figure. Myth=branding + time.

But the skein of myth is easily unravelled.

For example, he wasn’t even the youngest American president. When Theodore Roosevelt took over the office after the assassination of William McKinley in 1901 he was nine months younger than Kennedy.

And his credentials as a supposed political progressive – at least in a European sense – don’t stand up to much examination. In 1957 he opposed Eisenhower’s civil rights legislation. He persisted, when in office, with the Democratic party practice of appointing judges to federal courts in the south who were acceptable to the southern Democrats. One such JFK appointee, Harold Cox, once described African Americans as ‘chimpanzees’ after he had been elevated to the federal bench. During his first term as a senator Kennedy teamed up with the darling of the Republican right, Barry Goldwater, to try and keep rock and roll music off American radio stations.  He presided over the assassination of a supposed ally (and fellow Catholic) in Ngo Dinh Diem, beleaguered president of South Vietnam. He was also a cold war warrior, a member of the generation that rapidly moved on from fighting fascism to perceiving communism as an even greater threat. He was a product of his times who exemplified many of the partisan complexities and personal compromises inherent in the often perplexing American political system.

Which is not to say that Kennedy’s regime was all about style, image and misdirection. His achievements speak for themselves, though much of what stands to his credit today were initiatives brought to fruition by his successor, Lyndon Johnson. But let us not allow ourselves, as we frequently are, to be completely dazzled by the undoubted glamour and charisma of the man. Better to operate on the principle that ‘by their fruits shall ye know them’. The alternative, to fall victim to political mesmerism, is a three-stage process. First we’re bewitched, then bothered, finally we come to the point at which we’re just plain bewildered. For those who weren’t around in the 1960s, think the Prismatic President, Barack Obama.

The difficulty with inspirational rhetoric is that it comes minus the caveats of realpolitik. Thus: ‘Ask not what your country can do for you, but what you can do for your country (… as long as the Southern Democrats don’t start screwing around in the Senate.’) Or: ‘Yes we can (… provided the Republicans don’t control the House of Representatives.’) In response to an inspiring orator like Kennedy or Obama we tend, willfully, to delete the qualifiers and succumb to the rhetoric.

However, for all his faults, and because of the unfulfilled promise it is always tempting to ask  ‘What if it had been raining on 22 November 1963 in Dallas?’ This is the tantalising Kennedy counter-factual.

Obviously there would have been no Presidential open-top motorcade and Lee Harvey Oswald – or the Mafia, or the man on the grassy knoll, or the four French hired assassins from Marseilles, or whatever other conspiracy theory you subscribe to – would have been denied the opportunity to demonstrate his/their peerless marksmanship and Kennedy would have seen out his first term and probably been re-elected in November 1964.

There is no doubting his popularity in 1963. JFK was elected with just over 49% of the votes cast in the 1960 race for the White House. While in office his approval rating rarely dipped below 60%. After the Cuban missile crisis his ratings were in the high 70s. In a poll of 1960 voters taken after his death 70% claimed to have cast their ballots for him as President.

So what would that second term have been like? How would he have governed from November 1963 to January 1969? Would he have embroiled America in the Vietnam war in the same manner as his successor, Lyndon Johnson? Would he have managed to pass the civil rights legislation that he had initiated before his death?

Perhaps we only need to watch the next four years of the Obama administration to figure all that out!

Because Kennedy would not have ‘governed’ from 1964-1969, he would, like Obama, have been at the mercy of Congress. The essential difference is that JFK faced the opposition of Neanderthals who make the Tea Party look like Earl Grey and cucumber sandwiches. Obama is, by and large, blessed with the support of most of those members of the House of Representatives and Senate who call themselves Democrats. Back in 1963 Kennedy had to deal with ‘Dixiecrat’ legislators from the south with, in some cases, had more than a sneaking regard for the Ku Klux Klan. Many were themselves heavily invested in modified white cotton bedding. Some felt that their African American constituents should still have been harvesting the raw material, gratis. John Boehner is a gentleman by comparison.

We know some of what Kennedy wanted to achieve before Oswald intervened. His 1963 executive order reducing the number of American military ‘advisers’ in Vietnam by 1000 suggests that he did not see the commitment to South Vietnam as open-ended. Lyndon Johnson did not concur. But would Kennedy have been able to resist the demands of the Pentagon and the congressional ‘hawks’ and continue to downsize in south-east Asia after 1964? Barely a year after the Dallas assassination Johnson had installed thousands of American ground troops in Vietnam, to the detriment of his presidency and his legacy.

Would Kennedy have been able to push through the civil rights legislation that he, belatedly, had begun to champion?  While he had exploited the arrest of Martin Luther King just before the 1960 election to garner increased African American votes he spent the next three years ignoring King’s pacifist message and generating the sort of militancy in the African American community that King sought to curtail. While the intentions of his civil rights legislation were honourable Kennedy had a track record with Congress not dissimilar to that of Obama. He was reluctant to get down and dirty with the throwbacks and clientelists of Capitol Hill. Johnson had no such compunctions. It was Johnson’s intimate acquaintance with the use of political power that ensured the passage of the 1964 Civil Rights act.

June 1963, when he came back to Ireland, was a big month for John Fitzgerald Kennedy.  On June 10 he made a major foreign policy speech at the American University in Washington DC.  In a world dominated by ideas of mutually assured destruction he seemed, in the speech, to be extending an olive branch to the Russians. He announced that the Soviet Union wanted to negotiate a test ban treaty and that the US was postponing atmospheric tests of its own nuclear arsenal.

The following day, after Governor George Wallace of Alabama had been forced by Federal intervention to, literally, step aside and allow two African American students to pass into the campus of the University of Alabama, Kennedy made a largely improvised address on national radio and TV, promising equal access to public schools and enhanced voting rights, to African American citizens.

Then on 26 June he made his famous ‘Ich bin ein Berliner’ speech (the ‘ein’ was superfluous) in the divided German city a short time after viewing the newly erected Berlin wall. His subsequent visit to Ireland, while of huge sentimental significance, registered a 2.5 on the political Richter scale in the USA.

Such energetic activity on the foreign and domestic front may have heralded a renewed activism, a desire to propel his administration into a new orbit, an impetus finally to lead rather than to await developments, fly kites and dispense with the 1963 equivalent of safe focus-group politics.

But would it have yielded results?

John F.Kennedy died before Enoch Powell wrote in his 1977 biography of Joseph Chamberlain that ‘all political lives, unless they are cut off in midstream at a happy juncture, end in failure …’ It’s hard to think of an example that contradicts Powell’s axiom. Would Kennedy have been one of those rare exceptions? Probably not.  Almost three years into his term he had failed to bring about the sort of change he promised in his (or Theodore Sorenson’s) stirring inaugural speech. The likelihood is that he would have been re-elected in November 1964, become bogged down in battles with Congress and have limped to the mid-terms in 1966 and lame duck status. Such is the nature of U.S. governance. It is perilously easy for their, theoretically sound, system of checks and balances to become a profusion of roadblocks and barricades. Johnson, who could bully his way around Capitol Hill, might have helped push through the proposed civil rights legislation, much as he did during his own Presidential term.  But such an enormous expenditure of political capital would have fatally depleted Kennedy’s legislative reserves.

Different questions, but along similar lines, confront the current Democratic presidency. On the evidence so far, Barack Obama’s tenure, from which so much was expected, is the JFK presidency for slow learners.