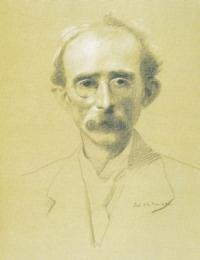 When it comes to the issue of the organization of the 1916 insurrection we have to look well beyond the esoteric, if palpably sincere, philosophizing of Pearse and even the military nous and pragmatism of Connolly and look to the quiet man in the midst of the fury.

Thomas Clarke, the self effacing tobacconist, was the spine, the heart and the genius of the Easter Rising. While he was surrounded by capable and resourceful allies it was Clarke who drove the rebellion.

The first oddity associated with the life of Tom Clarke is his place of birth. He was actually born in England, in the Isle of Wight. The second was his association with the British Army. His father was a serving soldier. At the age of 20 Clarke made the decision that was to inform the rest of his life when he joined the Irish Republican Brotherhood in Dungannon, Co.Tyrone. Two years later he was forced to flee to the USA to avoid arrest.

For fifteen years of his life he was someone else. Clarke was sent from America to London in 1883 to lead the bombing campaign masterminded by O’Donovan Rossa. He did so under the alias Henry Wilson and it was under that name that he served fifteen years in British prisons after his arrest and conviction. While in jail he met the old Republican John Daly. After his release Clarke married Daly’s niece Kathleen. The family didn’t approve. She was twenty-one years younger than her husband and marriage to a felon, albeit a jailed Republican, was not exactly what they had in mind for their girl. In addition Clarke, after a tough decade and a half in prison, looked far older than his years.

After spending almost a decade in the USA the Clarkes returned to Ireland in 1907 and Tom opened a humble tobacconist’s shop in Dublin. While outwardly settled and legitimate in fact Clarke continued his work with the Irish Republican Brotherhood, most notably as a member of that organisation’s Military Council. He became a sort of mentor to the likes of Denis McCullough, Bulmer Hobson and, in particular, Sean McDermott. Because of his background as a convicted felon, however, Clarke steered clear of overt political involvement. He left it to others to infiltrate, at the highest level, organisations like the GAA, the Gaelic League and, from 1913, the Irish Volunteers.

In 1916 Clarke essentially became the link to the ‘old’ Fenians who had risen in 1867, although he himself was only a child at that time. Acting on the Republican axiom that ‘England’s difficulty is Ireland’s opportunity’ he was determined to take advantage of the outbreak of the Great War in 1914. He worked assiduously to make plans for a rising around the country with the IRB at its core using the Volunteers as their battering ram. A reluctant Hobson and McCullough were jettisoned along the way, the likes of Pearse, Connolly, Plunkett and McDonagh were recruited.

The seven members of the Military Council – Eamon Ceannt being the one often ignored – became signatories of the 1916 Proclamation. Clarke should probably have become President of the Provisional Government but preferred to leave that honour to the more flamboyant and better known Pearse. Clarke himself was an anonymous figure, familiar only to fellow revolutionaries and ‘G’ Division of the Dublin Metropolitan Police.

Clarke was stationed in the GPO during the Rising and was the second leader, after Pearse, to be executed. His last message to Kathleen ended with the words ‘we die happy’. Familiar photographs of Clarke depict a thin, bespectacled, old man. He was actually only fifty-nine years of age at the time of his death.

Thomas Clarke, conspirator, Republican, tobacconist and victim of a 1916 firing squad, was born one hundred and fifty-eight years ago, on this day.