In this autobiographical novel—in an incident which typifies its lewd humour—the protagonist is accidentally circumcised when a sash falls as he is urinating out a window. The book is full of digressions, to the extent that the author doesn’t get around to describing his own birth until volume three. One page is entirely black. A post-modern classic of some kind? Actually, The Life and Opinions of Tristram Shandy, Gentleman, was published between 1759 and 1767.

It is the master work of, perhaps, the greatest, but most eccentric, novelists of the eighteenth century, Laurence Sterne. He’s one of the most accomplished English writers of that golden era. Except, of course, that like many other literary giants of the period, Richard Brinsley Sheridan and Oliver Goldsmith, for example, he’s not English, but Irish.

Sterne was born in Clonmel, Co. Tipperary in 1713, the son of a British Army officer with Irish family connections. The Sterne family moved around the country a lot—at different times Sterne lived in Clonmel, Wicklow, Dublin, Drogheda, Castlepollard and Carrickfergus. That’s an awful lot of blue plaques for one man. During these peregrinations Sterne lost four siblings in an era of horrendous child mortality.

Sterne eventually moved to England, at the age of ten, where, in the 1738, he was ordained as a clergyman. In 1759 he intervened in a row among clerics in Yorkshire by publishing a satirical work on the subject, entitled A Political Romance. This turned out to be both a wise, and unwise, move. On the positive side, it revealed Sterne’s comic and literary talents. However, the novel aroused so much animosity amongst his clerical peers that it ensured he would never become a bishop. Furthermore, at the behest of some of his scandalised and influential colleagues, copies of the book were burnt. Only a handful survived and most of those did not emerge until long after his death.

Sterne, who had tried to supplement his clerical income by farming—he was no good at it—now concentrated on writing. Despite suffering from tuberculosis from his mid-forties, he managed to write at prodigious speed, and produced more than a volume a year of the lengthy Tristram Shandy, until it was completed in 1767. The book brought him international renown. However, when it was discovered that the, often bawdy, novel, was the work of a parson, Sterne was subjected to opprobrium in equal measure.  Even the publication of two books of sermons failed to satisfy his prurient critics. This may have had something to do with the fact that a mischievous Sterne chose to publish them under the title The Sermons of Mr. Yorick, the name of a priest in Tristram Shandy.

For the good of his health, he left England for France in 1762. It can’t have been an entirely healthy move, because Britain and France were at war at the time. Nonetheless, Sterne’s reputation preceded him, and he was treated as a celebrity, rather than a spy, wherever he went. Some of his travels were incorporated into the later volumes of the life of Tristram Shandy, and into his last novel, A Sentimental Journey through France and Italy.

After his death, Sterne became the central character in a macabre gothic tale not of his devising. He died at the height of the era of the grave-robber, or ‘resurrectionist’. These were men whose business it was to provide corpses to the growing number of medical training establishments. Aspiring surgeons could only legitimately practice their anatomical skills on the bodies of hanged men and women. Because of the popularity of transportation as a humane alternative to capital punishment, legally acquired corpses were in shorter supply.

Sterne died in 1768, at the age of fifty-four, shortly after A Sentimental Journey was published, and was buried in the churchyard of St. George’s in Hanover Square. But he didn’t rest in peace for long. His body was stolen by grave-robbers, and sold to the University of Cambridge. There, however, it was recognised by a surgeon, and quietly re-interred in an unknown plot in the original cemetery. A skull, believed to be that of Sterne, emerged when the churchyard was re-developed in the late 1960s, which is highly ironic for someone who extracted so much humour from the name Yorick.

Laurence Sterne, author of Tristram Shandy and probably a century and a half ahead of his time, was born in Clonmel, two hundred and four years ago, on this day. 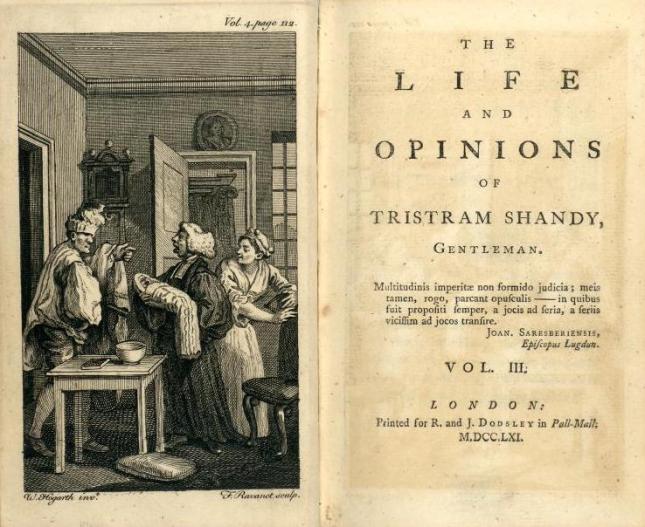